A model of current distribution in copper clad steel conductors at RF described a simple analytical model. This article compares the results of that model with graphs published in (Severns 2000) and is of particular interest since Severns used an FEA based model. 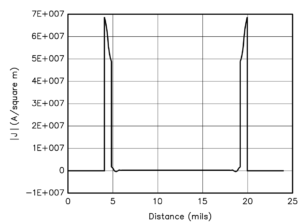 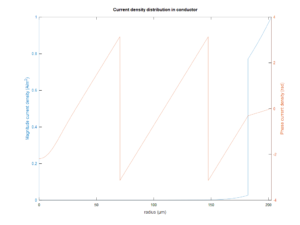 Above is from (Duffy 2017) and reconciles well with Severns. 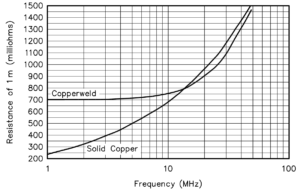 As a check, the resistance for this scenario of Duffy at 1MHz is 0.702Ω/m and Severns looks like 0.7Ω/m from the graph, they reconcile well. 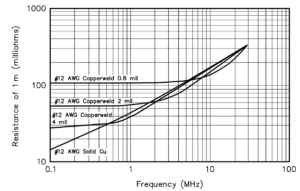 Above is Fig 5 from Severns comparing 2.053mm (#12) wire with different cladding. Again, at some frequencies, the CCS wire may have lower resistance that a plain copper wire.

As a check, the resistance for this scenario of Duffy at 4MHz is 0.075Ω/m and Severns looks like 0.079Ω/m from the graph, they reconcile fairly well. Both models expose the effect of the phase change with depth, eddy currents if you like.

The simplest algorithm often used is that \(MLL \propto \sqrt f\) which assumes only conductor loss, and that skin effect is well developed and estimated based on a simple model of skin effect.

In homogenous conductors, the underlying assumption fails at frequencies where the conductor is less than about 2 skin depths in radius transition towards low frequency behavior.

Clad conductors exhibit a departure at frequencies where the cladding is insufficient, and a further transition where the core material departs from well developed skin effect… a double transition if you like.

Fig 5 shows that at the first transition, departure from well developed skin effect (as in the copper conductor) is more complicated than often described.

Importantly, characteristic impedance Zo depends on the internal impedance of the conductor(s), and not only is the RF resistance affected by current distribution in the conductor, so too is the internal inductance and the combination may significantly change Zo at lower frequencies.