Loss of ladder line: copper vs CCS (DXE-LL300-1C) – revised for 25/07/2018 datasheet was a revision of an earlier article based on an updated datasheet from DXE. I noted that the specification data had artifacts that one would not expect of such a line, and I questioned whether the datasheet was credible.

John, KN5L, recently purchased, measured and published measurements of a 10.06m (33′) section of new DXE-LL300-1C which provide an independent dataset that might cast some light on the matter. 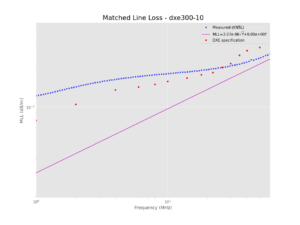 The chart above plots:

The theoretical line is based on well developed skin effect and \(MLL \propto \sqrt f\), resulting in a straight line on the log-log graph.

At 60MHz, KN5L’s measured MLL is a little worse than theoretical, quite probably due to the fact that these are 19 strand conductors, and the cladding thickness may be just too little to deliver copper like performance even at 60MHz. At lower frequencies, MLL is better, but a good deal worse than the theoretical MLL for copper conductors.

Whilst the MLL might seem small, these types of line are commonly used in scenarios with high VSWR. Let’s calculate the loss under mismatch of a scenario used for some recent articles.

Taking the MLL of the LL300 as 0.018dB/m, the calculated loss under mismatch is 2.3dB. It is not huge, but any assumption that the loss in open wire line is insignificant is wrong.

Lets evaluate the loss using a home made open wire line of 2mm copper conductors spaced 150mm. The calculated loss under mismatch is 0.114dB, a lot better than the previous case.