The original scenario then is the very popular 132′ multi band dipole:

We will consider the system balanced and only deal with differential currents, and matched line loss is based on measurement of a specific sample of line (RG6/U with CCS centre conductor at HF).

This article will calculate the same scenario with three feed line variants:

The loss under mismatch depends not only on the transmission line characteristics and length, but also on the load and the current and voltage distribution. 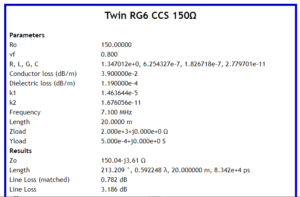 Above the 150Ω twin line with same CCS conductors as the RG6 has loss almost identical to the synthesised twin shielded in the original article. Almost all of the resistance in the coax is in the CCS centre conductor, so I assume that the loss in the twin CCS is approximately equal to that of the synthesised twin. Dielectric loss is less than 1% and can be ignored. 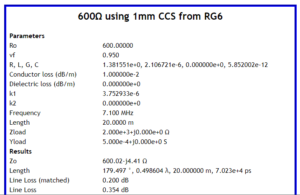 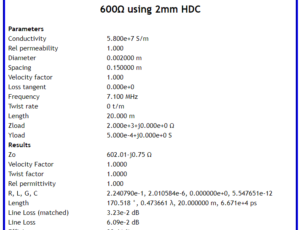 Above the 600Ω twin line with 2mm HDC.  The loss is considerably lower again at 0.061dB in this scenario, due to the higher Zo.

Note that in all these cases, the load impedance and length of the line form an important part of the evaluation scenario.

So, we can identify that two factors result in the quite poor performance of the synthesised shielded twin:

Improving both of these factors in the third scenario reduces loss under this mismatch scenario by a factor of 50.