For some years I have used Ceramica muffin fans for low noise and long life. They use ceramic bearing which are quieter than ball bearings, but longer life than sintered bronze bearings which dry out.

That said, I was annoyed to find the fan I have replaced in a one year old computer power supply fail after another three years. The original was a bronze bushed fan which dried up.

Whilst bronze bushed fans can usually be re-oiled, it is at the risk of failure again, and failure may damage something of much greater value than the fan. 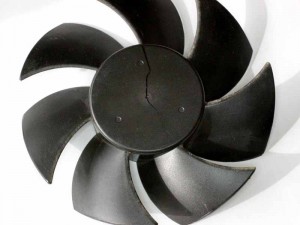 Above, a pic of the 125mm impeller which has cracked radially from the centre. This may have been caused by heat, dust build up on the impeller by reduce cooling of the hub.

This if the first Ceramica fan failure I have encountered, the good news is that the spindle/bearing were in good shape (spin freely, not sloppy), disappointing that the hub cracked. 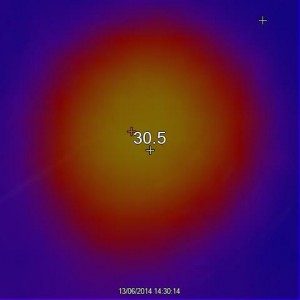 Above is a thermograph of the fan after a few hours operation. The fan hub is 30°, 10° above ambient which is quite acceptable.

We will see how the replacement goes.