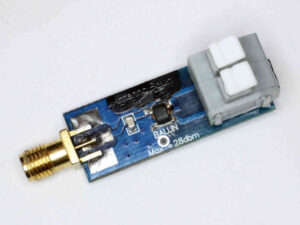 Above is a modified device with the transformer replaced with a Macom ETC1-1T-2TR 1:1 transformer. The replacement is not exactly the same pads, but it is sufficiently compatible to install easily. The track is cut to disconnect the secondary centre tap, essentially allowing the secondary to float and so have higher common mode impedance than with the centre tap grounded.

The most notable departure from ideal of these small transformers is leakage inductance of 50nH give or take.

The existing compensation capacitor was removed from the original and a sweep done from 1-300MHz. 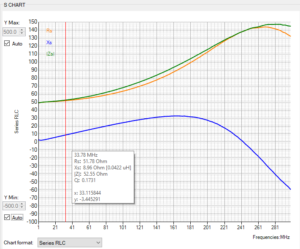 Above is the sweep presented at R,X (never mind the legend that says RLC)… this is hammy software. Focus on the X (blue) line, it is almost a straight line from 1 to 60MHz, \(X \propto f\), and the slope is about 40nH.

We can partially compensate that with a small shunt input capacitor. To quickly size that, the uncompensated sweep was imported into Simsmith. A shunt capacitor was inserted and its value adjusted for a reasonable response curve to 60MHz+. 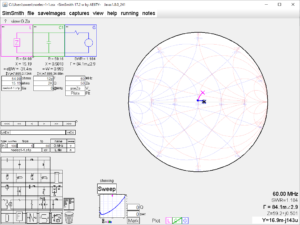 Above is a Smith chart presentation of the effect of the 12pF compensation capacitor. The magenta curve is the load characteristic (ie without compensation), and the blue curve is the compensated response. 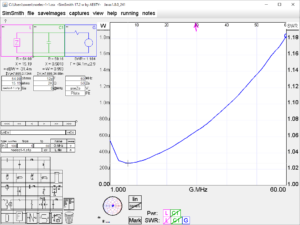 Above is the VSWR response curve with 12pF configured. 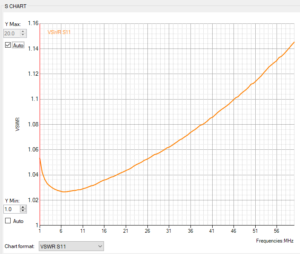 Above, the measured VSWR response of the (12pF) compensated assembly is in line with expectation.

Above, the underside of the terminal block has a 2 pin machined pin socket to allow convenient OSL calibration using the parts shown in
Antenna analyser – what if the device under test does not have a coax plug on it?. The wire terminals are not quite on the reference plane, but the error is small.

So, the result has low InsertionVSWR from 1-60MHz, and can conveniently OSL calibrated using the machine pin strip and small calibration parts.

The common mode impedance of the transformer alone was measured. 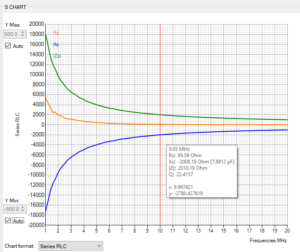