I spent several happy hours this weekend building the DE of the 6M Quad described in the June 2014 QST, p 30. When I got it completed, I put the antenna analyzer on it, expecting to find a nice resonance in the 50-51Mhz region and an impedance of 120 ohms or thereabouts. To my surprise, the radiation resistance in the couple of dozen ohm range, and resonance, if that is what I can call it, depends on how am I holding the loop.

After a bit of QST bashing in the thread, he later reveals:

The trial with the analyzer was about 2′ of RG-8X with PL-259s on each end, to BNC jacks on both antenna and analyzer with adaptors.

Much as the chap expressed his lack of confidence in modelling tools, NEC reveals what is happening.

Above is a plot of feed point R,X for a loop resonant around 51MHz. R changes relatively slowly with frequency, and X rises quickly and linearly with frequency. Resonance is very clear, and R is 127Ω… just as the chap expected.

Now to what he probably measured.

Above is the impedance seen for the same loop looking into 0.6m (2′) of RG8/X. There are two clear signs that transmission line effects are significant:

Above a wider plot shows the key indicators, the kink in the X curve and the variation in the R curve. 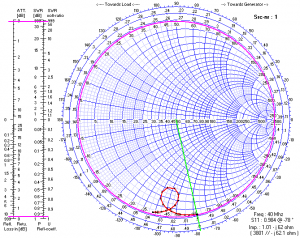 Above the 40-60MHz plot in Smith chart format. X never goes near +ve, the chaps quest for resonance is going to be confused by his measurements.

This probably isn’t a failure of QST to publish a sound design, but an analyser in the hands of someone who doesn’t really understand transmission lines… very common these days as when you buy an analyser, the requisite knowledge to fully exploit it does not “come in the box”, and in this instance, it has been confusing to the user.

Most simple antenna analysers indicate the impedance at their terminals.

One way to avoid these woes is to explore the instrument on known loads on known lengths of transmission line and understand the results obtained.

Making use of what was indicated

The measurement that could be made with the analyser under these circumstances that was quite indicative was the VSWR scan.

With a basic knowledge of transmission lines and the antenna being measured (a bare full wave quad loop), the following makes use of the flawed test configuration.

Above is the VSWR plot for the model, and it can be seen that VSWR is minimum (in this case) at 51.1MHz.

In the knowledge that around resonance, the feed point resistance of the loop will be relatively constant and X increasing relatively fast with frequency, minimum VSWR will occur very close to resonance (ie where feed point X=0), and that in the expectation that the quad loop should have R>50, we can estimate the feed point impedance at 51.1MHz as 50*VSWR+j0=50*2.54+j0=127+j0Ω. Of course, the same thing could be inferred from an ordinary VSWR meter.

A better method is to use the analyser, its software or some other software to back out the transformation by the section of coax.