This article explores the radiation efficiency of KP4MD’s (Milazzo 2012) small transmitting loop (STL) using a set of NEC-4 models of the loop at varying heights above ‘average’ ground.

PowerRadiated is found by summing the power in the far field in 1° increments using NEC. PowerInput is determined from excitation and calculated input impedance.

The model description comes from KP4MD’s article, and is used essentially unchanged, modelled in NEC-2. (Whilst I prefer NEC-4, the GH card uses NEC-2 extension syntax.)

The example loop is a an 18 sided polygon of 0.914m (3′) diameter of RG8 coax. The coax shield is modelled as a copper conductor of same diameter, a little optimistic. At 2000, capacitor Q might also be optimistic. Overall, the loop may be modelled with low loss. 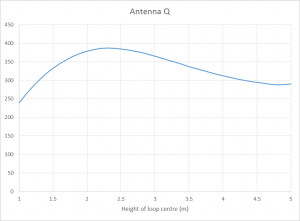 Above is a plot of antenna Q at varying heights. 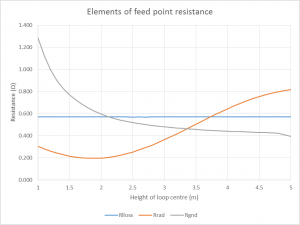 Above, the elements of feed point resistance extracted from the model.

Rlloss captures the power lost in loop conductor and tuning capacitor loss as modelled. As expected it is fairly constant.

Rgnd captures the equivalent loss resistance of power lost in heating the soil. It increases quite quickly below about 3m height. 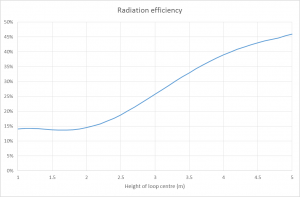 Above, the radiation efficiency falls off quickly below 5m height, partly a result of the falling Rrad and partly increasing Rgnd.

To some extent, the gain in specific directions may be more important than overall radiation efficiency. 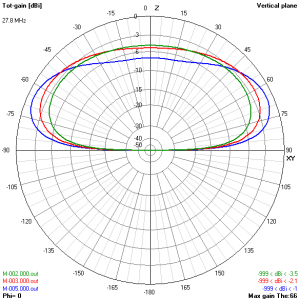 Above are plots of gains at three heights, 2, 3, and 5m. Gain at lowish angles improves with height, but not as much as suggested by the efficiency curve due to pattern changes.

The real loop uses a matching transformer which is not stepless, so achivement of a perfect match is unlikely. Nevertheless, a set of impedance vs freq data can be displayed with reference to an arbitrary Zo and the half power bandwidth obtained. 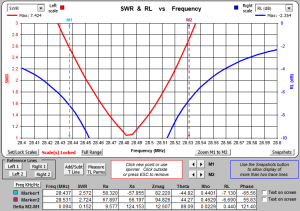 Above, KP4MD’s VNA measurements displayed wrt 60Ω (though it doesn’t show the reference anywhere on the chart).

The markers are set approximately to the half power points (VSWR=2.62 or Return Loss=7dB – the chart incorrectly scales Return Loss as a -ve quantity, ZPLOTS’ author obviously doesn’t share the industry standard meaning of the term Return Loss (IEEE 1988)). Half power bandwidth is approximately 94kHz at 28.5MHz which implies Q of 303.

This does not reconcile closely with the model which gives Q as 380 at 2m height. This suggests that the model has not properly captured all loss (eg conductor loss, capacitor loss, ground loss, matching transformer loss), and that real world efficiency and gain might well be a little lower than the model.