At (Hunt 2015) G3TXQ gave some measurements of his ‘balanced’ antenna system. 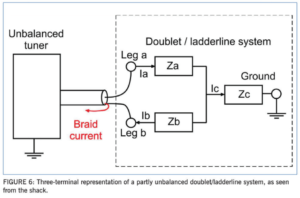 Above is Hunt’s equivalent circuit of his antenna system and transmitter. It is along the lines of (Schmidt nd) with different notation.

He made measurements that led to calculation of these components for the dipole which he states is visually fairly symmetric.

Above are the calculated values he gives at Leg a and Leg b. Lets assume that the measurements are made at the tuner interface with respect the the unbalanced tuner ground connection. Note that Za and Zb are not close to equal, so the antenna system is hardly symmetric or balanced.

Lets solve the network. We will set input power to 100W to find currents typical of a 100W transmitter. A bit of Python as a complex number calculator follows.

Note that differential current and common mode current will almost always each  be standing waves and their phase velocity may differ.

Some experts would insist that based on series measurement on a VNA which would give |s21|=-23.4dB, the common mode rejection of such a balun is 23.4dB. Of course that is a quite misguided concept as this worked solution shows it is just 20.7dB in this scenario.

I reported a similar experiment at Equivalent circuit of an antenna system. In that case, the antenna was more symmetric than Hunt’s dipole.