Recent versions of Windows 10 have made changes to some audio input processing. 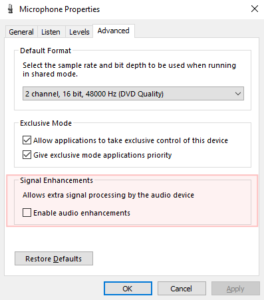 Above is a screenshot of a Microphone Properties window, and attention is drawn to the section highlighted in pink which may appear in some devices.

The Signal Enhancements would appear to introduce certain non-linear behaviour.

I preface this with saying the ‘enhancements’ are probably hardware dependent (ie the chipset used and driver capability) but may also include Windows core, and this report applies to my specific configuration but hints issues that may be systemic.

That said, I performed a simple test switching an audio sine generator between two close frequencies and observed the level vs time in SpectrumLab. 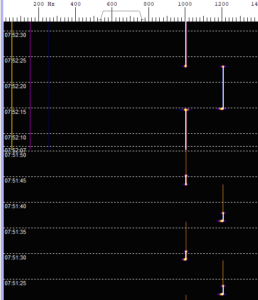 In the lower part of the screen, the gain reduces about 1s after the new tone is applied, and I measure the reduction at around 20dB.

Clearly this ‘enhancement’ will be a problem with using the sound input for any kind of instrumentation that depends on constant gain.

If you are using a sound device with one of my software applications that use sound input (FSM, NFM), then check that your audio settings have not been set to ‘enhanced’=ON during Windows upgrades.

This advice may apply to other software that depends on linear sound channel behaviour, not just instrumentation but perhaps things like WSJT and other demodulators.