A model for current distribution in a conductor is that for a homogenous conducting half space with surface current parallel to the interface. Current density at depth d is given by the expression \(J_r=J_R\frac{J_0(kr)}{J_0(kR)}\) where δ is the skin depth \(δ=(ω \cdot µ \cdot σ)^{0.5}\) and \(k=\frac{1-\jmath}{\delta}\), σ is the conductivity). This takes into account curvature of the conductor surface, albeit with slower compute time.

Let’s compare the two algorithms on a test case at 1.8MHz being copper cladding of 67µm copper over a steel core for an overall diameter of 1.024mm (#18). 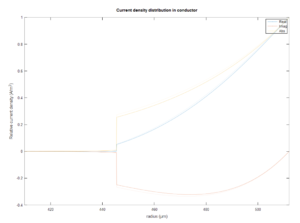 Above is a stacked image, the simpler algorithm is the feint plot.

There is a quite small difference in this case. When the expected loss of 400Ω line using the conductor is calculated, the result with the simpler algorithm is 1.3% less than the later one using the Bessel distribution.