(Austin 1987) described a multiband HF antenna that is very popular with hams some thirty years later.

In his article, Austin explained the characteristic of a single wire multiband antenna with a series section matching transformer. The geometry is quite similar to the G5RV with hybrid open wire and coax feed, but Austin pursued lengths of the dipole legs, and matching section length and Zo to optimise VSWR(50).

To give insight into behaviour of the ZS6BKW I have built and NEC-4.2 model of a ZS6BKW with dipole 28.5m (L1) of 2mm dia copper wire at height of 10m above ‘average’ ground (σ=0.005 εr=13), and 13.44m (L2) electrical length of 400Ω lossless transmission line. L2 was tweaked to optimise alignment of the VSWR(50) response with the ham bands. The model assumes no feedline common mode current.

Above is the VSWR(50) response of the model from 3-30MHz. Minimum VSWR near the nominated five bands is quite low. Note that VSWR(50) at 80m is quite poor.

Note that the ‘notches’ of minimum VSWR are quite narrow. It is perhaps naive to think of building this without fine tuning of L1 and L2 to optimise VSWR(50) for the installation scenario. 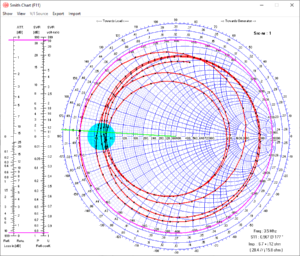 Above is a Smith chart of the NEC model Zin from 3-30MHz, and it can be seen that the impedance falls within the Target Area (TA) identified by Austin and highlighted here in cyan. The model reconciles with and confirms Austin’s design method. The cursor is at 3.6MHz (the intersections with the left outer red line and the green radial) and it can be seen that it falls well outside the TA, in fact Zin @ 3.6MHz is 8.09+j38.08Ω which gives VSWR(50)=9.8. 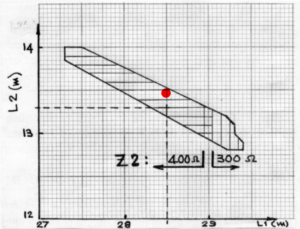 (Austin 2007) gave a chart that shows the range of combinations of L1 and L2 that are likely to give a good five band response. The dimensions used for the NEC model are shown at the red dot.

Optimisation of your own implementation

The target of Austin’s design was low VSWR(50) on five bands which might allow direct connection to modern transceivers that require a fairly low VSWR(50) load (VSWR<2).

The other benefit of low VSWR(50) is reduction of loss due to standing waves on 50Ω feed line.

A practical issue is that the ‘sweet’ spot is quite narrow, and not necessarily aligned as one might want on each band.

Measuring VSWR and frequencies of minimum VSWR can inform efforts to tweak L1 and L2 to better fit the installation scenario. A flash analyser is not needed for this, VSWR is the optimisation objective and hams pursuing other objective like Xin=0 are on the wrong tram. Obviously an analyser that can capture a VSWR sweep and save it is a productivity tool, but you can do this job with a MFJ-259B and pencil and paper (as we did once upon a time).

So, it may be worthwhile to choose a coax with fairly low matched line loss so that even if operating outside of the sweet spot, that radiation efficiency remains fairly good.

Minimisation of common mode current is important to achieving VSWR response close to prediction. Symmetry is important, and it is prudent to include an effective common mode choke at either end of the coax, or wherever else works best.

Don’t overlook inclusion of the correct velocity factor in calculating the length L2.

Whilst discussing optimisation, loss in the open wire line should not be ignored. Though very popular, I would not be using the common windowed ladder line using copper clad steel, especially the multi stranded type as they do not deliver copper like performance on the lower bands.

There have been various recipes for extending the common ZS6BKW to 80m, one of the most popular is that proposed by W5DXP. His method inserts a 500pF capacitor in series with one leg of the open wire line at the transmitter end.

Whilst there is little doubt that it worked for him, is it a solution for the scenario modelled above? 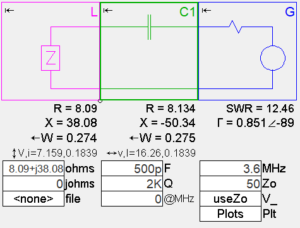 Above, a Simsmith model of the series capacitor shows that in this scenario, a rather good but practical ZS6BKW, it makes VSWR(50) worse. There is no value of series capacitance that will match 8.09+j38.08Ω to 50Ω, or indeed of any single component.

If 500pF or any other capacitance works for you, it is because your ZS6BKW departs significantly from the scenario discussed here.

Though often referred to as an optimsed G5RV, there is no similarity to the G5RV beyond the somewhat similar geometry.

The optimisation objective is VSWR(50) at the frequencies of interest.

There is scope to tweak the lengths L1 and L2 to optimise the VSWR(50) curve in an individual installation.