This article explores the radiation efficiency of a small transmitting loop (STL) using a set of NEC-4 models of a 3.14m perimeter loop on 7MHz at varying heights above ‘average’ ground.

PowerRadiated is found by summing the power in the far field in 1° increments using NEC. PowerInput is determined from excitation and calculated input impedance.

The example loop is an octagon of 20mm diameter copper, 1m across the sides of the loop. Copper loss is included, a lossless capacitor is used to resonate the loop. A real world loop would be less efficient. 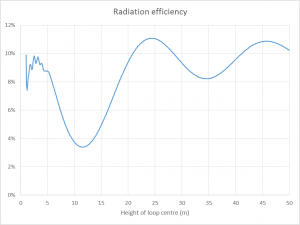 Above is a plot of radiation efficiency vs height of the loop centre. Note the periodic variation, minima are at approximately odd quarter wavelengths in height. 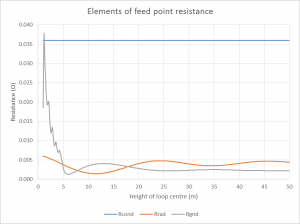 Rcond is approximately constant, which is to be expected, and it dominated feed point R. It represents RF energy converted to heat in the conductors.

Rrad varies with height, a result of the changing antenna pattern due to reflections from the ground. Because Rcond+Rgnd>>Rrad, changes in Rrad roll up into changes in radiation efficiency.

Rgnd varies cyclically above 6m, but rises rapidly below about 6m. It represents RF energy converted to heat in the soil. 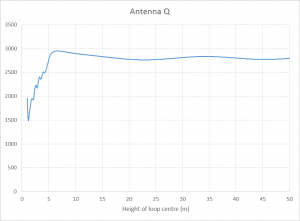 Above is a plot of antenna Q vs height. Remember that this is a model of an antenna with lossless tuning C, real life maximum Q might be well less than half of that shows depending on the capacitor. 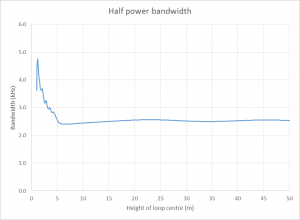 Above, the bandwidth plot derived from Q. Again, loss in the tuning cap etc will increase the bandwidth above that shown. Many hams brag about wide bandwidth, it is probably achieved by loss rather than radiation resistance.

The plots are for a specific scenario, and is dependent on frequency, ground type, loop physics.

To some extent, the gain in specific directions may be more important than overall radiation efficiency. 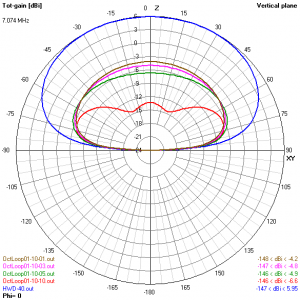 Interestingly, there does not appear much performance disadvantage at low elevation angles in locating the loop quite close to ground.

There is a complicated interaction between Rcond, Rrad and Rgnd that is dependent on the loop,  height and ground parameters.

It is unlikely that simple calculators or design tools take this effect into account at low heights.