The datasheet contains some specifications that should allow calculation of S/N degradation (SND) in a given ambient noise context (such as ITU-R P.372). Of particular interest to me is the frequency range 2-30MHz, but mainly 2-15MHz.

The specifications would appear to be based on models of the active antenna in free space, or measurements of the device using a dummy antenna. So, the challenge is to derive some equivalent noise estimates that can be compared to P.372 ambient noise, and with adjustment for the likely effects of real ground. 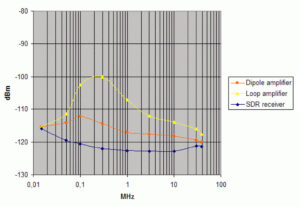 Above is the published noise measurements at the receiver input terminals. The graph was digitised and then a cubic spline interpolation used to populate a table.

Above is the assumed test configuration. We will assume that the receiver is accurately calibrated (both power and bandwidth), and that the noise power due to internal noise in the amplifier is the reported noise (the orange curve) less the receiver internal noise (the blue curve) measured with a 50Ω termination on the input. Of course these measurements need to be converted to power to perform the subtraction, and as part of the calculation, power in 1kHz will be transformed to power/Hz because Noise Power Density (NPD) is easier to work with.

We can then build a more complex model incorporating the feed line loss (10m of CAT6 FTP) and a receiver of given NF, find the ambient noise referred to the amplifier output terminals and solve for SND. We will assume that the loss in the balun unit is so small that relocating it to after the CAT6 feed line does not introduce significant error.

Recall that Gain and AF are related, every one dB increase in Gain corresponds to exactly one dB decrease in AF.

We will assume that the specification AF is given at maximum response (the usual convention), and that the Directivity of a short dipole in free space is 1.76dB, so the Average AF would be 3.76dB/m.

So, we will calculate Tamb’ being Tamp/Gain, and T’int being the sum of internal noise contributions of the receiver, lossy feed line, and amplifier all of these referred to the reference terminals. SND is then simply \(SND=10 log \frac{T_{amb}’+T_{int}’}{T_{amb}’}\). 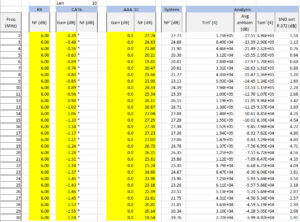 Above is the table of calculations. 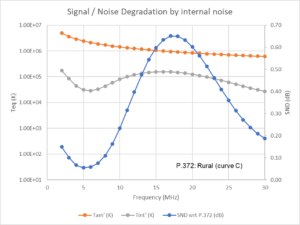 Above is a graphic summary of the analysis, the key metric being SND. Now P.372 is based on a survey with short vertical monopoles, so it probably overestimates noise captured by the short horizontal dipole by some dB.

The assumed Directivity and radiation efficiency based on a model at 7MHz are go to perhaps 15MHz at which point the length of the dipole and its height become more significant in terms of electrical length, and the pattern changes.

Note that this analysis assumes a linear receive chain, it does not include the effects of IMD.

So, whilst active short dipole antennas are not very popular in the ham world, they are popular in commercial and military applications, and in this instance, the AAA-1C would appear to perform quite well. This is of course only a desk study, the final test is of the real antenna system… though that is a little way off as post from Bulgaria to Australia is currently suspended.

Discussion with Chavdev (LZ1AQ) suggests that the assumptions made in this article are reasonable.