Small untuned loop for receiving – a design walk through #1 arrived at a design concept comprising an untuned small loop loaded with a broadband amp with input Z being a constant resistive value and with frequency independent gain and noise figure.

In that instance, the design approach was to find a loop geometry that when combined with a practical amplifier of given (frequency independent) NoiseFigure (NF), would achieve a given worst case S/N degradation (SND). Whilst several options for amplifier Rin were considered in the simple analytical model, the NEC mode of the antenna in presence of real ground steered the design to Rin=100Ω.

A question that commonly arises is that of Rin, there being two predominant schools of thought:

Each is limiting… often the case of simplistic Rules of Thumb (RoT).

Let’s plot loop gain and antenna factor for two scenarios, Rin=2Ω and Rin=100Ω (as used in the final design) from the simple model of the loop used at Small untuned loop for receiving – a design walk through #2. 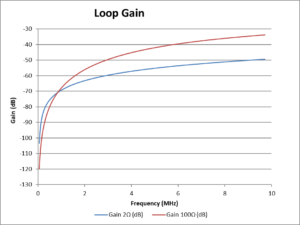 Above, loop gain is dominated by the impedance mismatch between the source with Zs=Rr+Xl and the load being Rin. We can see that the case of Rin=100Ω achieves higher gain at the higher frequencies by way of less mismatch loss than the Rin=2Ω case. 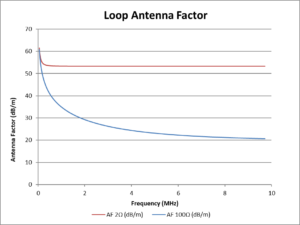 Above is a plot of AF for the two cases. Recall that AF is the ratio of the electric field strength to the loaded loop terminal voltage. Note that the Rin=2Ω case has almost flat AF from 0.2MHz up, whereas the Rin=100Ω is only flattening towards 10MHz. A very flat AF response is a desirable feature of a field strength measuring instrument, but is has much less value for a conventional receiving system.

Looking back at the gain plot, it is evident that the flat AF response comes at the cost of considerably lower gain at the higher frequencies. The effect of that is that receiver internal noise becomes more limiting unless that gain shortfall can be made up with low loss amplification, and therein lies the challenge.

The approach discussed at Small untuned loop for receiving – a design walk through #1 was not a design for constant AF, the main design objective was SND in a given ambient noise context… and that objective is directly relevant to ordinary receivers.