Small untuned loop for receiving – a design walk through #1 arrived at a design concept comprising an untuned small loop loaded with a broadband amp with input Z being a constant resistive value and with frequency independent gain and noise figure.

There have been many credible designs of loop amplifiers of gain in the region of 25+dB and NoiseFigure NF around 2dB. So lets work with that as a practical type of amplifier, though we will not commit to input Z just yet.

I might note that a certain active loop manufacturer claims NF in the small tenths of a dB, but it appears they needed to invent their own method of measurement… when questions the credibility of their claims.

Let’s calculate the NF of a cascade of the NF=8dB receiver, coax with loss of 2dB and a loop amplifier with NF=2dB and Gain=25dB.

The NF looking into the loop amplifier is 2.08dB.

Let’s try for something relatively compact, say around 3m perimeter, and a medium diameter conductor to reduce inductance a little and rigid enough to be self supporting. Let’s assume that the loop is in free space and that the perimeter is less than λ/10 so that a simple prediction of radiation resistance Rr can be made. The behaviour near real ground is a little different, tending to better gain. The behaviour a little above λ/10 also tends to be a little better than predicted.

None of the modelling is applicable to a small loop on the kitchen table coupled to the house wiring, other metallic services and structure.

So the loop source impedance and Rr are used to predict the mismatch loss to the amplifier input to calculate active antenna average Gain or average AntennaFactor, and signal to noise degradation SND calculated for the given external noise context, P.372 Rural.

Key parameters were adjusted to arrive at a compact configuration that met the SND<3dB design criteria. The chosen geometry was: 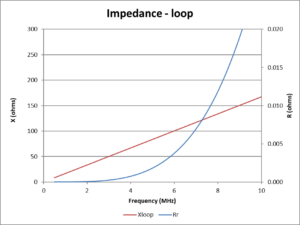 Above is a plot of the source impedance of the lossless loop. The loop is treated as lossless for simplicity as the mismatch loss to the amplifier is not very sensitive to the very small equivalent conductor loss resistance. 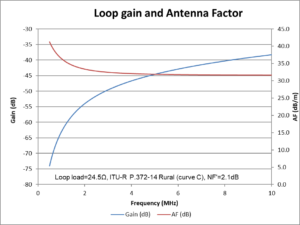 Above is a plot of the loaded loop Gain (average gain is 1.76dB lower, average AntennaFactor is 1.76dB higher). The low gain is due to the mismatch when loaded with the amplifier Zin=25+j0Ω (50Ω amplifier with 0.7:1 transformer input). AntennaFactor is calculated from gain, and it can be seen that from about 4MHz it is almost flat, and Gain∝-log(f).

The important metric is SND, the SND objective was the target of tweaking of the geometry. 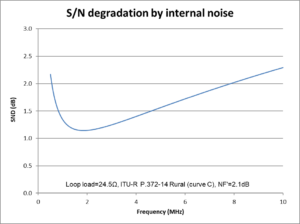 Above is the calculated SND, it meets the objective SND<3dB over the range 0.3-9+MHz. 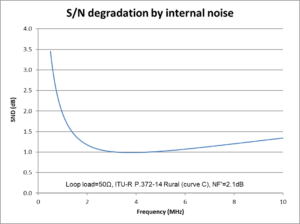 Above is the same plot with the loop terminated in 50Ω. SND below 1MHz is degraded and a small improvement in SND near 10MHz. Some users might judge that the design criteria is not too precious and simplification to use a 50Ω amplifier is a worthwhile benefit.

Note that the results apply to the scenario discussed, and are not necessarily extensible to other scenarios such as a lower ambient noise context.

So, with a little simple spreadsheet work, we have a candidate to take to the next stage, NEC modelling.

Small untuned loop for receiving – a design walk through #3