In other posts on LED luminaires, I identified the need for a test device for LED strings of up to 200+V at currents up to 280mA.

There are quite a number of competitive devices in the market, the article is a review of the iFIX RT300M v2 (which is also sold under other brand names, they may or may not be sourced from the same factory… the Chinese are copyists). 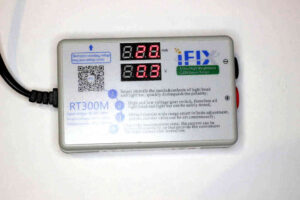 I purchased one of these devices, and it was faulty on delivery. The output voltage never rises above 0.3V, determined to be a hardware fault. With eBay’s intervention, a full refund was obtained without returning the faulty unit which turned out to be a small blessing later.

The v2 RT300M has a button on the top edge of the device.

Another was purchased for about the same price on Aliexpress… way over my usual limit because of the high risk of purchasing on Aliexpress, but there were none available on eBay.

The second one was faulty in a different way, it seemed to work but the voltage meter was wrong. There is a secret recalibration procedure, but applying that did not fix the problem, particularly that it was unstable.

Aliexpress firstly looks after itself, then the Chinese sellers, and the foreign buyer is a low priority. After a lot of messing around, a highly intensive process design to be a war of attrition, the high and mighty Aliexpress handed down a ‘judgement’ that it was not faulty, and no refund… so I have been dudded for $70.

So, was it possible to repair one using parts from the other?

I was able to get the first one working by replacing one of the switching FETs with one salvaged from the second… and it worked, or worked as well as they might.

The tester supports several modes, one is basically safe to most LEDs in that its maximum voltage of 15V will probably not damage common LEDs. It also has an automatic polarity detection mode, and this can impress very high reverse voltage on LEDs or strings or LEDs and destroy them.

So, it is tricky to use, one must keep one’s mind very much on the job to prevent damage to the DUT, particularly on LED strings fed somewhere in the middle where half the string has one polarity and the other half the opposite.

In summary, the experience has been:

If I knew what I know now, I would not buy one of these things.

The voltage measurement zero can be calibrated. From the seller:

The voltage needs to be calibrated if it is inaccurate again. Calibration method: When the tester is powered off, press and hold the button, short the +- output terminal (short the red and black test leads), and then power on to display the serial number and let go