Around 2015 I constructed a series of models exploring the effect of ground proximity on a small transmitting loop (STL).

The model series was run in NEC-2, NEC-4.1, NEC-4.2 and NEC-5.0, and the results varied. NEC-4.1 showed serious problems, eg negative input resistance at some heights. The problem was discussed with Burke, and he explained that there was a known problem in NEC-4.1 for small loops near ground, and sent me an upgrade to NEC-4.2 to try with the GN 3 ground model, but that the better solution was in NEC-5 if it was ever released.

NEC-4.2 solved the negative resistance problem, but some issues remained.

With the recent release of NEC-5.0, opportunity arises to compare all four approaches. 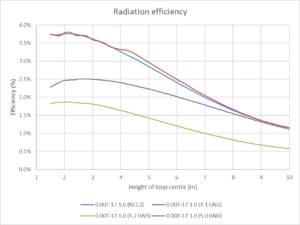 The plot above of radiation efficiency gives an overall comparison of the different model techniques. (Burke 2019) states Since the mixed-potential solution ensures that the approximated integral of scalar potential around the loop is zero, whether the potential is accurate or not, it might be expected to do better than NEC-4.

Now, keep in mind that these plots assume a lossless capacitor. Hams tend to assume that the Q of a vacuum capacitor (and its connections) is around 10,000 (near lossless in this context).

Lets proceed on the assumption that NEC-5.0 provides the best result. 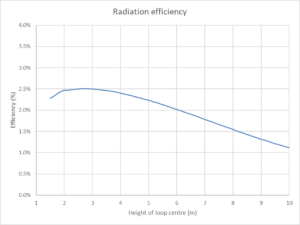 To be clear, the radiation efficiency is plotted above (recall that a lossless capacitor used). It is slightly better at the lowest heights, partly a result of the interesting interaction of radiation resistance Rr and equivalent ground loss resistance Rgnd. 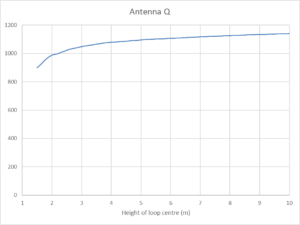 Above is a plot of Antenna System Q vs height. The curve shows that Q is degraded at lowest heights, but not by much… a result of the interaction of the effect of near ground on Rr and Rgnd. A Q around 1000 implies half power bandwidth (VSWR=2.62) of 7.2kHz.

Addition of losses of a tuning capacitor as low as Q=1000 would roughly halve the Q plot, and double the half power bandwidth to 14.4kHz for this geometry. 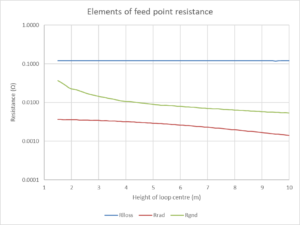 The chart above plots the elements of feed point resistance – note the log scale. This provides part of the explanation for the earlier Radiation Efficiency and Q plots, Rgnd increases as low heights, more so below about 6m (0.14λ). There is a gradual increase in Rr as height is reduced, a consequence of ground reflection.