A common method of feeding a small transmitting loop is to use a small auxiliary input loop. This is sometimes referred to as the “Faraday feed”, implying a shielded feed loop though many so-called shielded loops are not effective (Duffy 2007), but the loop does not need to be shielded nor does there need to be a metallic connection to the main loop.

This article looks at an equivalent circuit.

With the elegantly simple transformer-coupled Faraday loop feed method the 50Ω signal source merely feeds the auxiliary loop; there’s no other coupling / matching components required as there are no reflected reactive components to deal with (the main loop appears purely resistive at resonance with just the core Rrad and Rloss components in series).
The impedance seen looking into the auxiliary feed loop is determined solely by its diameter with respect to the primary tuned resonator loop.

Turner’s explanation states clearly that the R,X characteristic is simply multiplied by some transformation ratio to produce the impedance seen looking into the feed loop, and he offers an intuitive explanation.

Measurement of a prototype loop 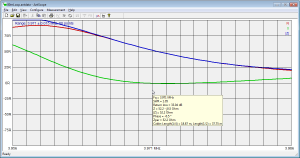 Above, measurements from a prototype matched loop did not reconcile with Turner’s explanation as R varied greatly around resonance. The R of the main loop would be almost constant over such a narrow bandwidth and so the main loop impedance does not appear to be simply multiplied up as stated by Turner. 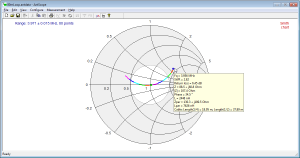 Above is the same impedance data presented as a Smith chart display.

By measurement of the half power bandwidth of the antenna, Q was found to be 132.2 and total resistance in the main loop to be 0.74Ω.

Above is an equivalent circuit for the antenna with instrumentation. The three inductors of the tee equivalent are shown as five to show the insertion of the L1, L2, and M components. In this instance, the transmission line as essentially zero length. The tuning capacitance is shown on the right and the total main loop resistance (radiation resistance and all loss resistances – conductor, capacitor and ground) as the port of the instrument for plotting. 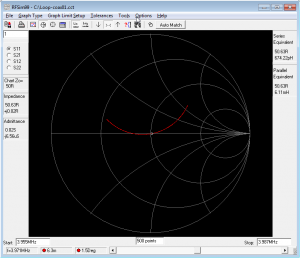 Above is a Smith chart presentation of the impedance response of the equivalent circuit. M was adjusted to obtain agreement with the impedance measurements shown earlier.