Deepelec store on Aliexpress sells a small test jig for use with their nanoVNA.. 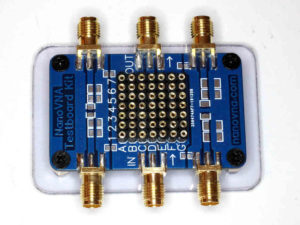 Above is the top view of the test jig mounted on a DIY PVC plinth. The test jig alone cost $17 on Aliexpress and took three months to arrive.

I strongly advise against buying on Aliexpress, or any other Chinese selling platform. 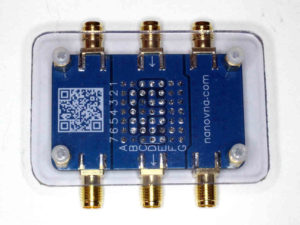 Above is the underside (again, the clear PVC plinth is not included in the price). You can see the track arrangement in the pic if you look carefully, it is quite hard to see under poor lighting. M2.5 nylon screws make non-scratching feet. 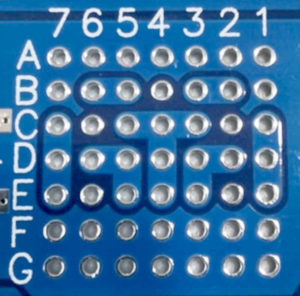 A processed image of the underside tracks makes them easier to see. 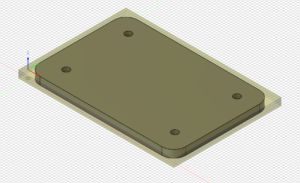 Above, the PVC plinth was designed in Fusion 360 and made on a CNC router, partly to validate a newly built workstation. The plinth could easily be made from hand tools from a small piece of sheet acrylic or PVC. The plinth isolates the test board from clutter on the bench, and reduces the risk of scratching surfaces.

I was of a mind to not fit the outer two SMA connectors as they make wrench access to the middle connectors more difficult. On a trial fit, I could get around 90° range with the narrow style torque wrench, so one flat of the hex nuts per bite. Standard open end wrenches might not fit.

It is undoubtedly Chinese Quality (bit of an oxymoron really), half the SMA connectors would not slide onto the board without bend pins being straightened and the machine pin connectors were difficult to solder, partly due to the very small unmasked section of copper that the soldering iron needs to make good contact with to transfer heat quickly… especially where the donuts were in the ground plane. So, poor design, poorly executed.

I did not find the two SMD resistors that were supposed to be in the kit despite being very careful unpacking the kit as I half expected the resistors to be 0805 parts thrown loose into one of the bags. No big deal, I would not have installed them anyway.

What is needed that is not supplied in the kit are some OSL calibration parts built on some male machine pin strip, the missing resistors might have been useful for that. Basically it is a half baked knock off of the SDR-Kits jig, so very Chinese. I have one of each, the SDR-Kits jig is more expensive and much better value and it does not involve using Chinese selling platforms.