It would seem that many are quite confused by information from Airspy. The following quote from an online forum captures the confusion.

The main issue is that it has a massive self resonance at around 4MHz which causes a large variation in signal level and overall sensitivity across the 1-30MHz spectrum. 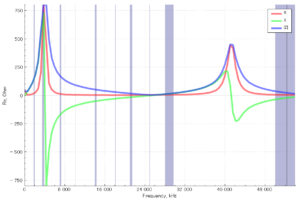 Above is Airspy’s published impedance plot looking into the supplied 1m feed line with the YouLoop-2T at the other end.

Keep in mind that this antenna is clearly intended as a receiving antenna. You might then ask is this plot directly relevant to the intended application.

It isn’t directly relevant, and as the quote shows, it confuses some readers.

Let’s turn the thing around and instead of exciting it from the receiver end of the feed line, let’s excite it from the antenna. 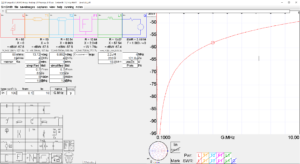 Above is a Simsmith model of the antenna system in free space in receive mode.

In looking at the plot of power in the load (which is effectively the average antenna system gain), readers will note that it is a smooth curve (apart from a glitch where it seems Simsmith plotted at 0Hz), and there is no discontinuity around 4MHz as the quote stated.

The assumptions used introduce some errors:

When you look at the average gain plot from the Simsmith model, you might understand that a seller might not want to publish that data because naive users might think that such low gain makes it unattractive.