Above is the 24W LED plate. The plate has 48 0.5W 5730 LEDs in a 24×2 configuration. If we allow that the 24W rating is total input power, driver loss is typically around 2W so the LEDs themselves will draw 22W. We expect that the voltage at 22W will be around 80-85V, and will require ~275mA current. The original LED driver supplied (180mA) is not capable of that current and was discarded. A nominally 300mA LED driver was procured for about $10 for five, and they fall short, delivering 260mA but that is good enough for this implementation. 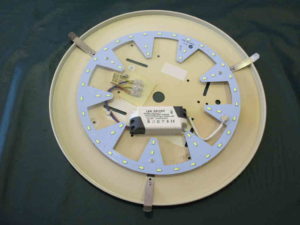 Above is the reworked oyster back plate. The LED driver is secured with two M2.5×6 screws and nuts, magnetic mounts are used for the LED plate, and the original terminal block was replaced as it was heat affected. The capacitor visible is the original X2 EMI suppression capacitor and it was retained.

Small neodymium magnet mounts are available and convenient… if they ever get delivered. My experience is that only on order is five was delivered… possibly a result of the seller putting the magnetic mounts loose in a flimsy bag which risks them getting attached to other freight or to freight handling equipment. The only package to arrive was generously wrapped with bubble wrap which isolates the magnets from the package exterior. 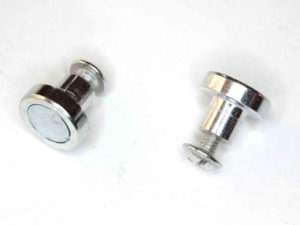 The main advantage of this style of mounting is that it is easy to adapt a replacement LED plate when it fails (they do not last nearly as long as most claims), and they are not ‘standard’ parts so the flexibility provided by the magnet mounts is useful.

On completion, total power input when cold is 24.4W, falling to 23.2W after an hour of operation.

The conversion was successful. It should only be attempted by competent persons.

Frustrations include the inability to buy product on eBay or Aliexpress that meets stated specifications, to get components undamaged and working, and to receive the components in less than several months.

Cost of conversion was about $18 for parts but took six months, whereas I bought a ready made complete 24W LED Oyster from an Australian seller for $29 and which was delivered undamaged and meeting specification withing a few days.