In fact, the supplied driver is rated at 180mA, resulting in 14W to the LEDs and 16W measured total input power, just 66% of the advertised power rating. 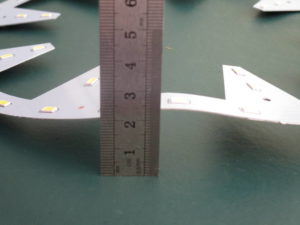 Above, the plates (both of them) arrived packed loosely in a flimsy plastic bag and were bent in several places as show above. The plates are quite soft aluminium of 0.7mm thickness and bend very easily, they need to be packed between stiff cardboard sheets or the like for transport.

Clearly the plates cannot be used without attempting to straighten them. 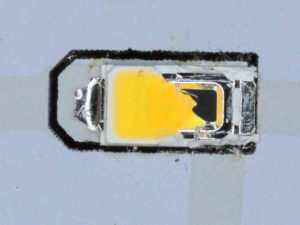 Above, LEDs in the region of a bend or after straightening a bend often crack, sooner or later, and render the whole plate useless unless repaired. Successful repair really requires purpose specific equipment.

When paired with a LED driver rated at 300mA, but actually delivering 260mA, LED array voltage was 85V for LED power of 22.1W and total input power of 24.4W.

No mounting hardware was provided. Small magnet mounts are available and convenient… if they ever get delivered. My experience is that only on order is five was delivered… possibly a result of the seller putting the magnetic mounts loose in a flimsy bag which risks them getting attached to other freight or to freight handling equipment. The only package to arrive was generously wrapped with bubble wrap which isolates the magnets from the package exterior.

Two out of two LED plates delivered were seriously bent which when straightened, risks damage to some LEDs. I have obtained refunds for all damaged LED plates, and all that fell well short of specification, and IIRC, this is most purchases.