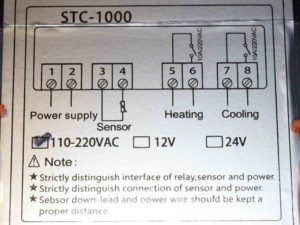 This article describes a similar update to a later model STC-1000. 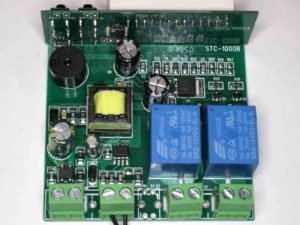 The interior is fairly similar, and the front panel board is almost identical apart from different labeling.

However, it resisted attempts to simply write new firmware using the SWIM interface at the top of the front panel.

The front panel was removed and the MCU (which was unlabelled) was replaced with a STM8S103F3 (for larger EEPROM and so, profile capacity).

The chip could still not be programmed.

On checking further, the VCAP capacitor (C2) required by the MCU was not fitted. This is a filter cap for the on board 1.8V regulator and is important to the STM8 chip. In fact C1 was also not fitted, it is on the /RST line, and probably worthwhile. 1µF caps were fitted to both C1 and C2 (though it was only C2 that prevented programming), by preference C1 should be more like 0.1µF.

A further test revealed that adding C1 and C2 to a board as supplied with the unmarked chip did not allow reprogramming of the chip. 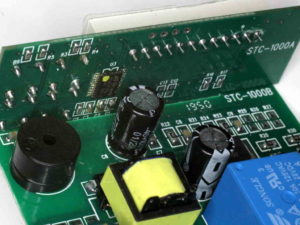 Above, the reworked front panel board with upgraded MCU and C1 and C2 installed (below the MCU).

The chip was programmed with the high capacity enhanced firmware. The new chip worked a treat, and makes available to larger profile space.

This is not to recommend the firmware change for most common applications, it specifically targets home brewing process control and is unnecessarily complicated for simpler applications.