At nanoVNA-H – de-embedding the feed line in remote measurement I recently wrote on a procedure that can be very useful to refer measurements made at the transmitter end of a feed line to the antenna feed point.

A correspondent recently shared an AIM 4170 scan file of his 40m half wave dipole antenna system taken from the transmitter end of the coax and maintaining the common mode current path by bonding the shield of the coax connector to normal connection point on the transmitter.

Above is his graphic of the measurement looking into around 23m of RG58 feed line.

We can make some further inferences from this chart… but to inform the process, lots consider the half wave dipole.

Let’s look at an NEC model of a 40m half wave dipole at a height of a quarter wavelength above average ground. 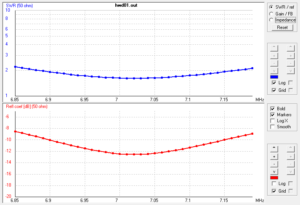 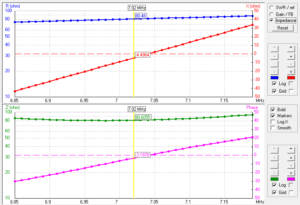 Above is the impedance plot, focus on the R, X plot as it is simpler to characterise. Around resonance of the dipole (ie where X=0), R increases very slowly with frequency and X increases relatively rapidly with frequency. At minimum VSWR, X is almost zero, and feed point impedance is almost purely resistive, approximately VSWR times 50, so Z is about 80+j0Ω ohms in this case. 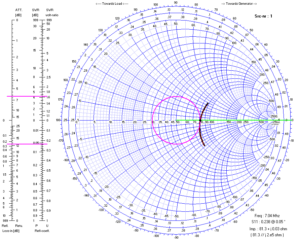 Above is a Smith chart view of impedance about resonance and minimum VSWR.

Note that the shape near minimum VSWR (the distance to the chart centre) is much like part of the letter C but rotated clockwise a few degrees. The actual value of R is scenario dependent, quite sensitive to height above ground and the ground parameters, and commonly between about 55 and 95Ω.

Further interpretation of the first chart

So lets return to the first plot of the real world dipole system.

More information from the scan

Viewing the scan data as a Smith chart is quite revealing. 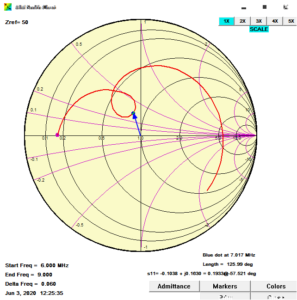 Above is the Smith chart view from the AIM software with the cursor set at the frequency of minimum VSWR. The blue arrow is my addition to show the vector that is Γ or s11. You may note that the value of s11 is given in the lower right corner of the graphic as -0.1038+j0.1630=0.1933∠-57.521. Anyone with basic understanding of complex numbers will recognise that the conversion to polar form is wrong, it should be 0.1933∠122.5° which is the blue vector added to the chart above. (This is quite possibly the result of a amateur programmer using a form of the ATAN function that returns results in the range ±90°… kids in the kitchen!)

So an informed guess is that since there is around 23m of feed line, the actual length is closer to 298.9° or 23.4m… it is still an approximation as it has not taken into account line loss or the small residual feed point X at minimum VSWR.

So the next step would be to use the ‘refer to antenna’ function in the AIM software to apply a lossless line transformation of 23.4m (VF=0.66) and adjust that length until the Smith chart plot is C shaped with a small clockwise rotation in the region of minimum VSWR. I cannot show that to you because one of the many limitations of the AIM software is it has to remeasure the DUT to apply the transformation… DUH!!!

Nevertheless, lets extract the datapoints by hand from the scan file (another of the many software deficiencies) and plug them into Simsmith and de-embed some lossless line.

Above, the magenta plot is the measured data, and the blue plot is the measurement with 23.6m of lossless VF=0.66 line ‘subtracted’ and represents what should be seen in the AIM software when the length is tweaked for the characteristic C shape with a few degrees of clockwise rotation.

With this transformation, the other AIM plots should be now adjusted to the feed point (though an approximation only because feed line loss was not factored in). But like everything with AIM, double check everything.

As mentioned, the AIM software does not allow factoring in the line loss when de-embedding the line. 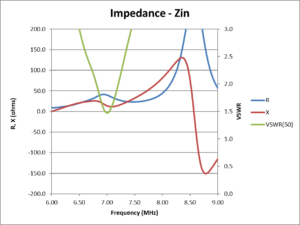 Above is a plot derived from the scan file of R, X and VSWR looking into the line. 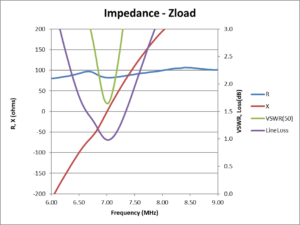 In the above plot, the de-embedding of RG58 (including its loss) is performed in a spreadsheet to obtain the feed point R, X, VSWR and loss of the line section.

The first optimisation target for this antenna system should be to adjust the dipole length so that minimum input VSWR occurs at the desired operating frequency.