The circular LED plates all had 36 x 5730 nominally half watt white LEDs arranged as 18 parallel pairs in series.

It is difficult to find datasheets from reputable manufacturers of 5730 LED. Cree makes 5630 which are similar size (though different footprint) and also rated at nominally 0.5W. 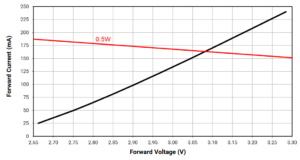 Above is the V/I characteristic from Cree’s J series datasheet with an approximation of the 0.5W line superimposed in red. The V/I combination for 0.5W is at the intersection of the two lines, about 162mA and 3.08V.

It seems that many Chinese manufacturers quote slightly higher voltages, possibly a result of higher bulk resistance and there is a corresponding lower current for 0.5W, but unlikely to be below 150mA.

So, in the LED plate configuration described earlier, current in two parallel LEDs needs to be 300mA or more for 0.5W each, or 1W for the pair. In the case of the 18×2 LED configuration, that gives total LED power of 18W. 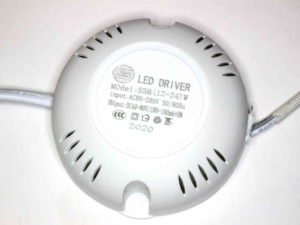 Above is the supplied driver rated at less than two thirds of the current needed for 18W. Experience is that they deliver less current than rated. 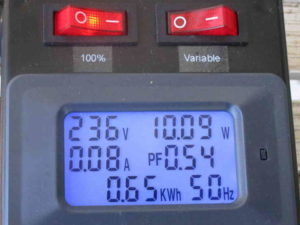 Above, little wonder that the light measures less than two thirds of its rated power. Now you can dance around whether the published power rating is the power input at 230VAC, or the power to the LEDs, but 10.09W AC input power is nowhere near the claimed 18W.

The issue here is not the LEDs and LED plate, but the performance of the LED driver. Attempts to source separate drivers have been unsuccessful so far, two orders refunded due to expiration of the guaranteed delivery data, one order still alive.

So far, all four orders for complete LED plates with drivers (7 sets) have been refunded because the were “not as described”.

It is hard to understand why the Chinese sellers set out to cheat the buyer so blatantly, perhaps buyers tend to not test compliance with seller’s claims.

Of course a conservative design would run them a little less than their maximum rating to achieve longer life, eg 36 LEDs at 140mA each for 16W AC input. LED service life claims are mostly fraudulent, and de-rating extends service life. To that end some nominal 280mA drivers have been ordered.