This article describes a NEC-4 model for a small transmitting loop with auxiliary loop feed.

The main loop is 1m in diameter, 20mm diameter aluminium tube and has inductance of about 2.5µH, tuned with 200pF, and total resistance (loss +radiation) of 0.048Ω. The feed loop is a fifth the diameter.

The two loops are coupled, so they have mutual inductance, and it is the extent of the flux coupling and resulting mutual inductance M that performs the impedance transformation of 0.048Ω of the main loop to the desired 50Ω feed point impedance. 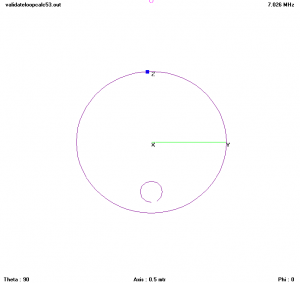 Above is the geometry of the conductors modelled. The loop diameter and conductor diameter for each loop affect the result, as does their relative positions. 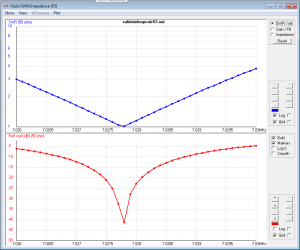 Above, the VSWR / RL response of the model. VSWR is very good at resonance. 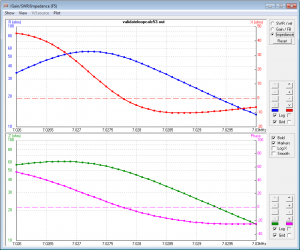 Above is an impedance plot of the same scenario. R is hardly constant. 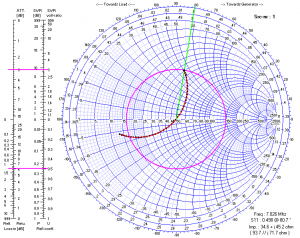 Above is a Smith chart plot of the same scenario. R is hardly constant, but note that the red curve is a circular arc of about the same radius as the R=50 circle, and it is rotated about the chart centre. This hints a transformation like that of a length of 50Ω transmission line.

The model was amended to include a length of 50Ω line to build out the impedance transformation. The length of line was chose to rotate the Smith chart curve above to lie over the R=50 circle. 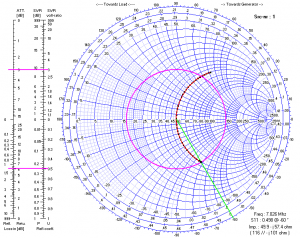 Above, the desired rotation performed. Note that the curve lies almost perfectly over the R=50 circle, R is approximately constant. 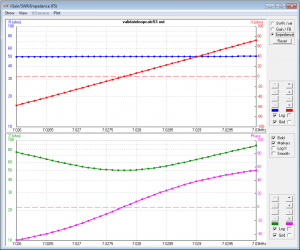 Above are the new impedance plots. R is nearly constant around resonance, and X increases fairly linearly. 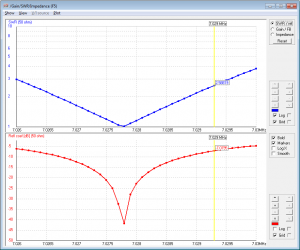 Above is the VSWR / RL plots. The half power bandwidth of the antenna (between VSWR=2.6 points or RL=7dB points) can be seen to be approximately 3.1kHz which reconciles with the prediction made earlier.