Some months ago I purchased  a TKDMR TD2B LED tester. 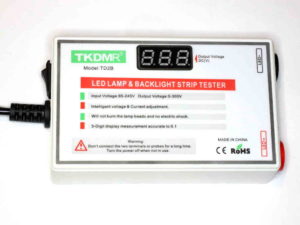 Above is the tester. It comes with a 3 month warranty, FWIW.

The basic concept is that it supplies a controlled current drive to a LED load. The current is initially small and steps up to 30mA, and the driver can supply up to 300V.

The supplied manual applies to two model numbers, and previous experience with this maker is that you need to check the board for the model number. I have another tester with one model on the front and a different board… Chinese are masters of deception.

This one does look like a TD2B tester, nothing on the board markings disagrees with that.

Whilst checking the board designation, I noticed a crack in the case. 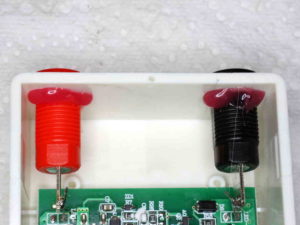 Above is a pic of the test lead sockets, they appear to have been glued into the case. The red hot melt is my addition to try to ensure that the sockets do not pull out of the case due to hairline crack at the left side of the black socket. Chinese Quality… bit of an oxymoron really! 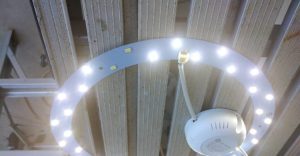 I had the opportunity to test it on a 18W LED ring which had 2 LEDs fail with an hour of power on (yeah, I know, Chinese Quality). Yes, both parallel LEDs shorted… which is unusual, one failing usually protects the other.

Anyway, the tester worked ok, it was handy in identifying the LEDs to remove and a test that they were soldered properly when replaced (it is very easy to get a short circuit under the SMD chips… one needs just enough solder paste that they float into alignment, but not so much they float to the other pad and short the connections.

So, it worked ok, seemed ok in concept even if Chinese Quality in execution. There is a new model at nearly twice the price… I don’t think it represents good value. If you get one of these without the cracked case or other defects, it is good value.

There are a large number for similar testers on Aliexpress. I bought this one from the factory shop… but they lied about delivery being unaffected by Wuhan, and whilst guaranteeing delivery in 35 days, it was more like three months… so it was free.

I found the factory shop blatantly dishonest in their statements resisting a refund due to expiry of the on-time delivery date… they lied that there was a tracking record to avoid the claim, and at that time there was no tracking record… it had not been delivered and tracking records placed it at an airport in China. Why would they lie about something that is so provably wrong?