I recently purchased two packs of 2x Osram Substitube LED replacements for a T8 36W florescent tube. The price per tube was about double that of a T8 fluorescent, and claimed life was 30,000 hours.

Note that LED life is usually an estimate of the time for 50% failure. Curiously, Osram individual LEDs have lower lifetime estimates for single LEDs, strings of LEDs will have lower lifetime, and lifetime for say 5% failures would be even lower. On the basis of experience with LED lighting, it might be optimistic to think that most of these lamps will last at least 5,000h.

In the event, three of four tubes had broken glass (yes, they use a glass tube much like the T8 fluorescent tube… though not sealed at the ends), and the other was DOA, no light output.

The LED driver is attached to pins at one end of the lamp, and covered by a label over the glass. Note that there are several incompatible schemes used in T8 fluorescent replacement LEDs, the other scheme bonds the adjacent pins at each end of the lamp and connects line and neutral to opposite ends. Osram calls this a “Type A” connection, and as the name suggests if can be fitted to an ordinary magnetic ballast luminaire PROVIDED the original starter is replaced with Osram’s “LED starter” which is actually a HRC fuse of around 1A rating. 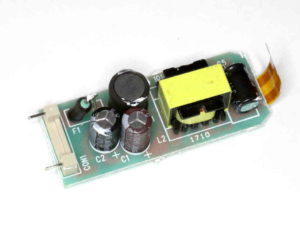 Above is the top view of the electronics. 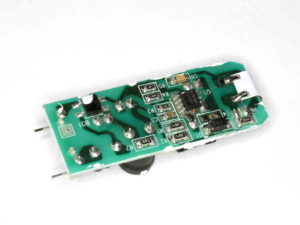 Above is a underside view of the electronics.

To its credit, it does have a pi section C-L-C LPT on the DC side of the rectifier, so hopefully RFI is low.

I do have four T8 battens converted to double ended Type B LED replacement. They require conversion of the luminaire wiring to suit. The lamps have an aluminium extrusion for the ‘back’ half and a translucent plastic diffuser covering the LEDs (which are fixed to the aluminium for heat sinking. They are much more robust than the Osram Substitube. In two years at an average of 10h per day, ~7,000h, two have failed (50%). One started flickering (a sign of LED driver failure) and the other lost one quarter of its LEDS (single LED failure in a series / parallel string).