Readers of (How) does this balun work? have asked about the meaning of the terms Current Balun and Voltage Balun. The following is a cut and paste from my old site.

The terms Current Balun and Voltage Balun are often used. This article explains the key characteristics that determine which best describes a particular balun. The approach taken is to charaterise a balun because of how it behaves externally rather than the internal implementation.

The discussion in this article is for signal flow from the unbalanced side to the balanced side.

Balun loads are often though of as a simple two terminal device. That is actually quite inadequate, they should be thought of as a three terminal load which can be simplified to a delta or wye equivalent circuit and one terminal of that network is connected to the unbalanced input ‘ground’ terminal.

Baluns may appear ideal if they are driving an isolated two terminal load, and there would be no need for a balun if that was the case.

Common mode current is the difference between the output terminal currents, it flows to the unbalanced input ‘ground’ terminal.

An ideal current balun delivers currents that are equal in magnitude and opposite in phase.

A good current balun will approach the ideal condition. It will deliver approximately equal currents with approximately opposite phase, irrespective of the load impedance (including symmetry).

Common mode current will be small.

If the load impedance is not symmetric, then the currents flowing in each output terminal will not be equal in magnitude and opposite in phase.

A balun cannot be a good Voltage Balun and a good Current Balun at the same time, it is one or the other, or neither.

An ideal balun performs an ideal impedance transformation, nominally 1:1 unless specified otherwise. Practical baluns depart from the ideal, and the departure is often specified as Insertion VSWR.

If the application is one where current balance is important then a current balun is the better choice. For example:

If the application is one where voltage balance is important then a voltage balun is the better choice. For example:

An exercise for the reader 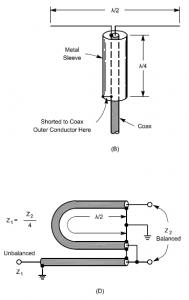 Above are two baluns from the ARRL Handbook, neither uses a magnetic core. The second also performs 4:1 impedance transformation. Classify each as a Voltage Balun, Current Balun, or neither. Why?