I purchased a kit to convert a oyster luminaire to single colour LED on eBay. The kit was nominally 18W, supplied with the 5730 LED plate and driver module for about $10 incl shipping.

A cautionary note: do not play with these things unless you have the necessary competencies.

The thing was packed in nothing more than a plastic mailing bag and was bent in several places in transit from China. It was not usable in that state and some LEDs were not working so my money was refunded in full (after the usual tug-o-war eventually resolved with eBay intervention). It had to be straightened to be usable, but at the risk of damaging LEDs and possibly cracking or compromising the insulation layer. 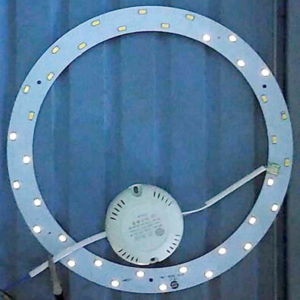 Above, after flattening the back plate, nearly half the LEDs are not working. 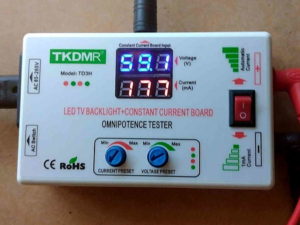 In fact on measurement, LED power is 59.1V @ 0.177A which is 10.46W, just 58.1% of the rated power. Chinese cheats! The tester is inserted here between the supplied driver and the LED board so that it measures voltage and current into the LED board.

Given our history with a lot of LED downlights is that average life is less than 2 years for those used for more than an hour per day, we have to expect to replace these LED kits every year or three if they are used much. The 50,000-100,000 hours claimed by greenies and manufacturers are wild dreams, the Chinese Quality LED driver does not last nearly that long, perhaps 2000 hours tops and we have had ‘Cree’ LEDs fail at way under 1000 hours. 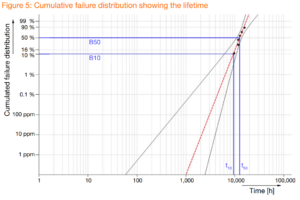 Above is a graph from Osram’s AN006 on LED reliability.

On ‘serviceable units’ with a single driver and 4 LEDs, I have experienced failures of the driver, and of single LEDs that would turn on and off in an apparent temperature driven cycle, my casual observation is that the driver failures account for more than LED failures. Whatever the fault, they are unusable.

The ‘serviceable units ‘perspective is particularly relevant to series LED strings as used in this board. If one LED fails open circuit, its ‘partner’ will fail shortly after due to overcurrent. If that fails open circuit, the whole thing fails to produce light. On the other hand, if a LED fails short circuit, it simply reduces light output by the contribution of two LEDs, and several could fail like this before there was an unacceptable drop in light output. I have also observed failures where it seems that the LED does not produce light, and is neither a low or high resistance, but more like a TVS / zener diode characteristic and the LED string may produce acceptable light output on a single failure.

I have also experienced T8 fluorescent LED replacements which contained 4 series strings in parallel develop intermittent flashing in one of the series strings which condemns them with all their embedded energy costs to landfill.

Another issue, is loss of lumen output and more so with warm white LEDs is wear out of the phosphor that corrects the light temperature. In my experience, most LED lights fail for other reasons before the light colour becomes unacceptably bluish, or before light output has fallen to an unacceptable level.

Drivers are certainly a reliability issue, and stings of many LEDs reduces ‘serviceable unit’ reliability. Modular drivers that can be replaced allow replacement of either driver or LED assembly for repair.

Returning to the subject LED plate

This article explores methods for fault finding and repair of the fittings, The LEDs themselves are well under $0.10 each in hundreds, but you do need inventory for each colour temperature used in your premises.

It may be possible to fault find these with an ordinary multimeter, but realise that LEDs may not conduct with less than 2.5-3V on them. A further complication is LEDs in parallel may be difficult to find which LED is shorted (if only one).

I warned here of the unsuitability of the current regulation of an ordinary bench power supply for LED testing due to transient behavior: Current regulation dynamics of Atten APS3005S. One could improvise a current source with a constant voltage source and appropriate series resistor, though whole strings may require much more voltage than common bench power supplies. 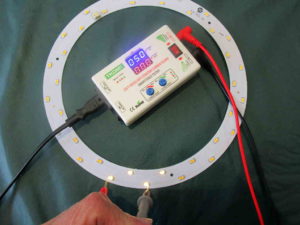 A better technique is a purpose specific tester for LED strings (as used here and in TV and computer screen backlights). The tester here is labelled TD3H but has the newer KT4H board in it… typical Chinese confusion

Sometimes you may see a small black dot on the LED, a sign of overheating and that begs replacement even if they are still working.

So, the next issue is removal of the faulty LEDs.

It is not practical to remove them with a soldering iron, the best way that I found was to heat the aluminium back plate by placing it on a temperature controlled plate at about 250-300°. for my first trials I used a portable electric cast iron hot plate and an adjustable ‘dimmer’ to set the temperature in the above range (measured with a thermocouple meter).

That works ok, after pressing the plate to the hot plate with a wooden stick for about 10s, the LEDs can be slid sideways off the contact pads. 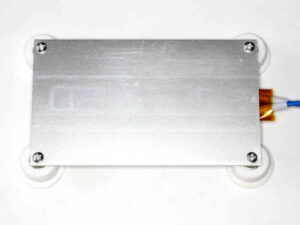 Above is an inexpensive thermostatically controlled hot plate which works very well. It takes about 10min to come to temperature on 230V, and when the LED Plate is placed firmly on it, it takes around 10s to melt the solder  or solder paste. Note that as packaged, this would not comply with Australian electrical safety standards. The pic shows a unit as supplied, I have replaced the screws with countersunk screws. 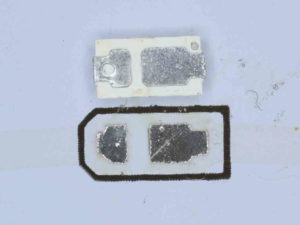 Above is a pic of an original LED and the contact pads. It seems that manufacturers have not standardised the LED pads or recommended PCB footprint. The most common element is a gap of around 1.4mm between the cathode and the next pad (though in this case, the LED is smaller than this). 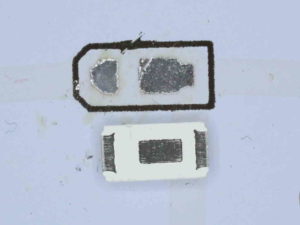 Above is a pic of a more common 5730 LED pad layout, and it does not match the plate pads. Note that the middle and right pad are both connected to the anode. It is important to make surface tension work for rather than against proper alignment, otherwise you will have shorts under the LED. So, to this end I dispensed small dobs (spherical, about 0.4mm diameter) of solder cream to the left hand pad, and the left hand end of the right hand pad so that if the LED is applied to the paste with its right hand edge lined up exactly with the right hand black outline, the critical insulating gaps are aligned and when the solder melts surface tension will tend to align the left hand gaps. If the LED is place 1mm left, it the middle pad will bridge two PCB pads and we have a short circuit (and two LEDs will not light).

Well, that’s the theory… and it worked a treat. Holding the plate in contact with the hot plate causes the solder to melt after 10-15s and a small silver flow is seen at the left edge of the LED. A couple of seconds more to be sure the middle pad has flowed and gently remove the plate from the heat. Four or five LEDs are soldered at once.

The repaired luminaire kit was run for three hours and held approximately constant power input at 11.8W. This puts the LED driver loss at 11.8-10.5=1.3W or 11%.

Intensity at 1m in front of the LED array was measured at 340lx, giving a source intensity of 340cd.

The specified conical apex angle for the 5730 LEDs is commonly 120° and light output for warm white is commonly 53lm for 0.5W input, so luminous efficiency of 106lm/W. 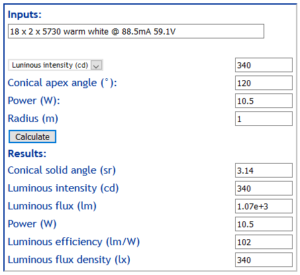 Above is a calculation based on the measured intensity, it reconciles well with datasheets. Note that the LEDs are running at about 56% of their rated output, good for LED life, but typical Chinese lies in that it is rated for 18W but LED consumption is 10.5W. 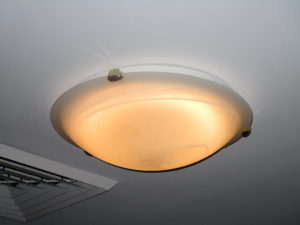 Above, the luminaire with LED ring fitted. The colour appears much whiter than the camera captures, but not a bluish daylight colour.

Light flux is 330lx at 1m below the ceiling which compares with 160lx for the same luminaire fitted with new 2x15W CFLs. Less than half the power for double the light.

Now I treated this piece as a test piece and was not worried about destroying it.

The white insulating coating is 100µm, and we might assume that the thickness is divided equally under and over the copper track, so we have an insulating thickness of 50µm. Most good plastic insulating materials have a dielectric strength better than 15MV/m, so 50µm would withstand 50e-6*15e6=750V. PTFE is four times that strength so 50µm would withstand 3000V. Most conformal coatings exceed 60MV/m, so again greater than 3000V.

So, I did a high voltage test on it. We might expect that 18 LEDs in series is about 18*3.4=61.2V and with a non-isolated LED driver (the usual case for low cost drivers), we add that to the expected peak AC voltage of 255*2^0.5=361V for a total of 421V. I tested insulation between tracks and backplane for 30s at 680Vrms (960Vpk, more than double the working voltage) with no sign of excessive or increasing leakage so it appears safe to ground the backplane. I would not connect the backplane to unearthed exposed metal, I doubt the insulation is Class II rated.

I also explored using a gasflame for desoldering and soldering. It is not a good idea, it is very easy to overheat the backplane causing bubbling of the white insulation.

Hot air from the front is very slow and chars the LEDs, from the back is very slow unless temperature is very high and again the risk is bubbling the white insulation.

Other luminaires and LED fittings

The whole thing becomes more complicated with luminaires that allow different colours to be dialled up.

Inexpensive products exist that will allow dialing the colour temperature from a wireless contoller.

I cannot help but think investment in these gimmicks is unwise when it is a struggle to find luminaires that deliver t50 of 5000h in the range of practical domestic scenarios.

One of three outstanding orders for 18W ring LED plates and drivers arrived today, but incomplete. The magnetic mounts are missing, so some were purchased on up to 90 days delivery and a three week refund hassle starts with the seller of the 18W LEDs.

This project is 4 months old now, and two luminaires were converted, albeit with improvised mountings for the moment (well… up to 90 days).

The outcome is very good, the journey is a real hassle… but that is what it is like dealing with Chinese sellers on eBay and Aliexpress. 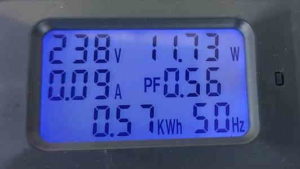 Another outstanding order for LED plates and drivers arrived today. The LEDs are cool white when warm white were ordered, the LED plates are bent, a result of inadequate packaging, and the power input is just 11.7W. The Chinese cheats delivered drivers marked 180-190mA, it needs 290mA to deliver 18W to the LED string. Within an hour of switch-on, one LED plate lost 2 LEDs, that does not auger well.

A continuing frustration has been trying to buy the magnetic mounting posts. So far four orders have fallen over, and two remain alive. In my experience Chinese sellers do not pack magnets so that the package does not stick to other freight, containers or handling equipment (front end loaders in some videos of Chinese mail centres). 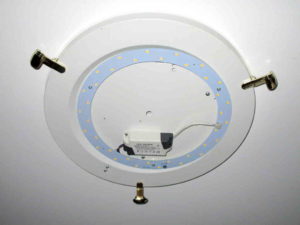 Replacement 300mA LED drivers were ordered to obtain near rated 18W. Though rated at 200mA, on test they deliver only 260mA which gives total power input of 17W after warm up. They have been deployed in that configuration.

These were relatively expensive luminaires, and conversion to LED in a flexible way provides a longer term future for them, and worth the considerable pain in dealing with Chinese cheats on eBay and Aliexpress.