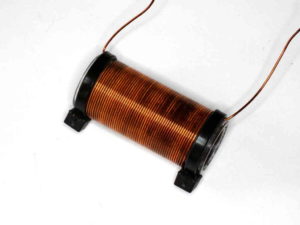 So, this is an air cored inductor, permeability is approximately that of free space, a constant 4πe-7 independent of frequency. Nevertheless we will see that apparent inductance can change with frequency.

The inductor was designed to be around 20µH using Hamwaves Inductance calculator. 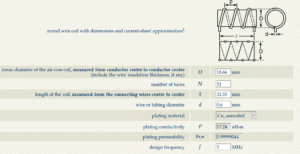 Above the physical dimensions.

Above, the equivalent circuit at 5MHz. Our measured inductor will be a little different due to some additional distributed capacitance and transmission line effects in the test fixture.

The test jig is very simple, the inductor is connected between the centre pin of Port 1 and the shield of Port 2 connectors. (I should note that my nanoVNA-H has a shorting bridge between connector shields: Strength of reinforcement of nanoVNA-H connectors). The pigtails are about 40mm long and they contribute to the measurements to some extent, but they may be representative of how such an inductor may be used in circuit.

The fixture could be represented as a two wire transmission line of Zo almost 600Ω and 40mm in length. Later a measurement of 3.5+j250Ω @ 2MHz could be transformed to 3.48+j248.82Ω at the coil ends due to the 1° length of 600Ω line. Understanding fixtures is important, and this fixture has very little impact at the lower frequencies, those that we will find are most relevant for discovering the inductance of the coil. 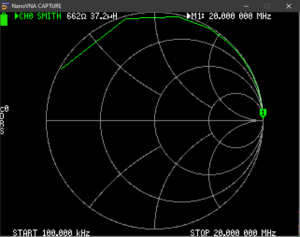 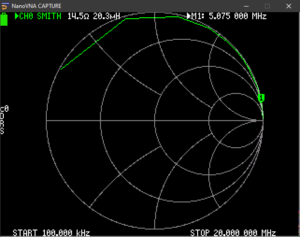 Above, at 5MHz, L=20.3µH, right on the design target, but half of that just measured at four times the frequency, 20MHz.

Let’s learn from that… 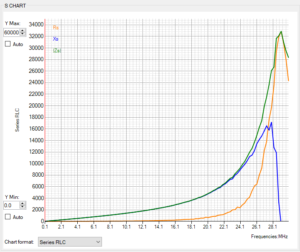 Above is a sweep from 0.1-30MHz. Though the chart format is stated “Series RLC” it actually shows (series) R, X and |Z|(the latter for the hams who do not truly understand impedance… but here it obscures X which I do want to talk about).

So, understanding that up to about 20MHz, the X trace lies under the green trace, we ask what should we expect the X trace to look like.

In an IDEAL inductor, the inductance IS independent of frequency and \(X=2 \cdot \pi \cdot f\) so it should be a straight line. In this case, a PRACTICAL inductor, it might be almost a straight line up to 5MHz, but it certainly is not above that.

So, the equivalent series inductance of a practical inductor is not independent of frequency… though it might approximately so at sufficiently low frequencies. 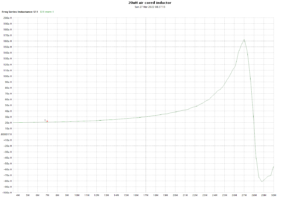 Above is a plot of the equivalent series inductance. It is flat below about 5MHz, but rises significantly above 7MHz. We can approximate the response up to and a little above SRF (28.1MHz) by considering that there is an equivalent shunt capacitance of approximately 8.8pF which will resonate the 20µH inductance at 28.1MHz.

For a simple air solenoid like the DUT, at low frequencies, the equivalent resistance Req is approximately that of the conductor given skin effect and proximity effect. Broadly, increasing frequency by a factor of four should approximately double Req 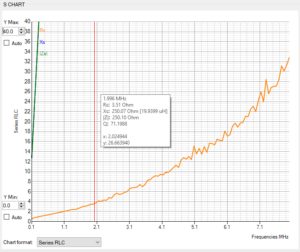 Above is a scan expanded to show R at low frequencies. At the cursor @2MHz, R=3.5Ω, and at four times that frequency, 8MHz, the value is noisy but around 32Ω, not double that of 2MHz, but nearly 10 times.

The DUT might be considered simply an inductor, but more completely it is a resonator and it has a self resonant frequency in the fixture in this case of about 30MHz. The departure from ideal is not solely due to the fixture, most of it is due to the inductor itself. The inductance calculator used above gives a self resonant frequency (SRF) of 40MHz for the coil alone.

At frequencies approaching SRF, the inductor behavior is not simply that of an IDEAL inductor, and this will affect measurement and behavior in the intended application circuit.

For some materials the relative permeability has a significant imaginary component (ie, it is a complex value), and may be frequency dependent at some frequencies.

Differently to the online expert’s advice, frequency dependent magnetic cores are not a result of the toroidal winding, but the core material, and ferrite cores may behave quite differently to powdered iron cores or air cores.

These effects will flow into measurement.

There are many articles on this site about measuring ferrite cored inductors.