I have reported issue with the USB-C plug / socket arrangement on the nanoVNA-H.

It is very sensitive to any jiggling of the cable or connector, causing a reset of the nanoVNA which almost always means lost work. The supplied cable was a partial cause, but sadly the jack on the PCB is also faulty.

This has progressively gotten worse to the point the nanoVNA-H is unusable. I have had a replacement socket on order for months from China where public health problems are causing chaos, it has only just shipped so could be some months yet.

Anyway… it finally arrived after many months. A pack of 10 sockets cost $2.30 incl shipping, so it gives one a fair idea of how cheap the low grade connector that was used would have come. 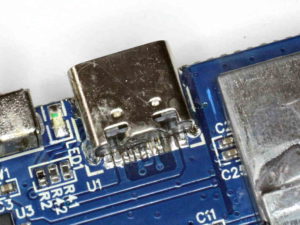 Above, the replacement USB-C socket soldered in to the board without removing the display. The SB1 pad lifted of the board during removal of the old socket, no connection is made to it, so no harm done.

The connector pins were soldered by running a line of solder down the lot without worrying about bridges, then removing the excess with solder wick. A pretty standard technique of SM ICs.

The new socket provides a much more positive click on engagement of the plug in either orientation. The original socket was clearly cheap Chinese junk.

So for now, the nanoVNA is working again. It has suffered most of the hardware failures / defects that users have reported, but none yet in the battery area. Time will tell.