A recent online discussion contained an analysis of the radiation efficiency of a vertical monopole over real ground.

The poster dismissed the values calculated by 4NEC2 and proposed his own formula \(RadiationEfficiency=\frac{35.6}{\mathbb{R}Z_f}\) where 35.6 is the radiation resistance Rr of a quarter wave monopole over a perfectly conducting earth (PCE).

The reasoning seems to depend on Rr being independent of the ground type, but that is quite flawed.

Let us look at an example of a quarter wave monopole with 120 shallow buried radials, average ground, at 3.8MHz. 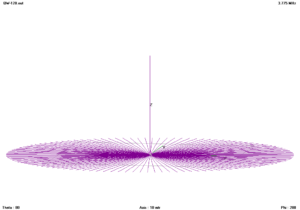 Above is the model geometry.

Some key values directly from the NEC report file and hand calcs: 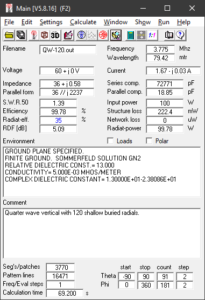 Above is the summary form from 4NEC2. It is consistent with the hand calcs from the NEC report file.

In some ground scenarios, feed point R may be less than 35.6 which would imply more than 100% RadiationEfficiency. 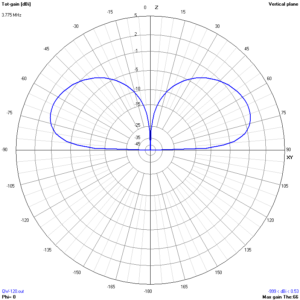 Above is the gain plot from 4NEC2, and because of the antenna symmetry, it is approximately symmetric in rotation about the Z axis. The calculated average gain of 35% or -4.56dBi is believable.

The plain English explanation is that more current is needed than with a PCE to obtain the same total power in the far field of \(I^2R\) so since I is increased, R is decreased.

Is 120 buried radials equivalent to PCE?

No. The gain pattern is substantially different. Different in shape and magnitude. 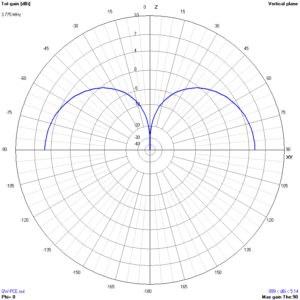 Above, the gain pattern for the same monopole over PCE. The maximum gain is substantially higher, and average gain is almost 0dBi (some very small loss in the monopole conductor).