When I was a student at TAFE in 1970, a teacher, Milton Moore, explained why the lab power supplies that were used, Perini & Scott 30V 2A, were the largest power supplies given their modest capability.

He explained that they were almost student proof. He went on the classify students in three categories, the average students constituted the bulk, then there were the quite inept who damaged the best equipment by doing things that no one could have anticipated, and the very bright who sought to understand equipment and expose their weakness.

At the time I was very interested in overcurrent protection of linear regulators, so this was especially interesting.

ua723 – the darling of power supply designers of the time

Lets look at the issue with the ua723, recently released at that time and appearing in lots of designs. 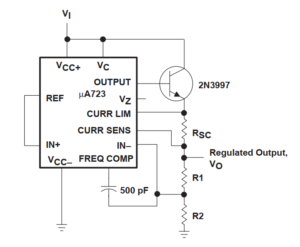 Above is a schematic from the ua723 datasheet. Rsc is the current sense resistor and it is chosen to develop 0.6V at the current limit, so for instance in a 20A power supply it would have a value of 0.6/20=0.03Ω. So, the current sense circuit presents a Thevenin equivalent circuit of Vth=Rsc*I and Rth=Rsc.

Above is the detail of what is inside the ua723 on the CURR SENS and CURR LIM pins, they connect directly across base emitter of a small transistor.

So, in the event of excessive current, the base-emitter is forward biased and the transistor conducts shunting current away from the base of the pass transistors, so limiting the current to about that that just causes the current limit transistor to conduct.

Some power supply designers even charted the V/I characteristic to show a very sharp knee and the perfection of the current regulation.

That sounds simple enough, what a great idea?

So if the power supply components can withstand the transient, the current is not contained and provided that the pass transistors can handle rated current at zero volts out (that is another significant issue), all is well.

But, what happens if the short circuit is removed after a millisecond and some milliseconds later reapplied after the current limit circuitry has ‘relaxed’?

Whilst the power supply might withstand a small number of these transients, it may not withstand the fault condition repeated at short intervals for a long time. The vulnerable part of the ua723 was the current limit transistor, the base emitter junction would be destroyed, the current limit no longer effective, and then on a sustained fault the pass transistors are destroyed. A very common scenario with power supplies of this type.

I think it was a valid test, it simulated what happened if a loose test lead dragged across an aluminium panel making intermittent connection as it did so.

To get better insight into the problem, I designed a short circuiter using a bunch of 2n3055 transistors, a driver and a pulse generator so that I could capture what was happening on an ordinary CRO. There was a fine balance between capturing a useful repetitive scope trace (on a non-storage scope) and destroying the DUT… I did go through a few ua723s.

Today we can capture that in a single trace, and modern current probes make capture of voltage and current waveforms relatively trivial.

I owe my understanding of this aspect of linear regulators to Milton’s practical test of lab power supplies for students. 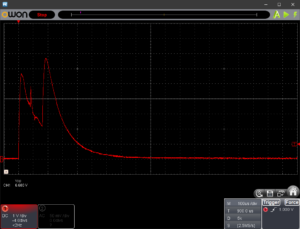 Is there a solution?

Darryl Lieux (inventor of the ua723) could have done better with more robust current limiting circuits, but the problem is not a ua723 problem, it applies to all implementations of the circuit whether using ICs or discrete components.

I came to a view that directly connecting the current sense resistor to a base emitter junction is quite flawed. It might deliver excellent quiescent current regulation, but at the expense of surviving transients which is often its main purpose.

Some series resistance to limit the current that might flow into the base does improve the survivability, but at the expense of degraded current regulation. More complicated networks can use a heftier diode junction to protect the current limit transistor to provide even more robust behavior.