I am a frequent user of 4NEC2 despite its many defects. It is a great work of software, in need of improvement that I suspect will never happen. Its author explained some time ago that it was developed in VB6 and with Windows upgrades, he no longer has a working VB6 development platform.

So, despite its defects, it is a very useful tool.

This article set about explaining interpretation of the summary statistics shown on 4NEC2’s main form.

I will sometimes substitute _ for – in some 4NEC2 quantity labels for clarity in mathematical expressions.

Let us draw on the IEEE standard dictionary of electrical and electronic terms (IEEE 2013) for widely accepted meanings for some key terms. 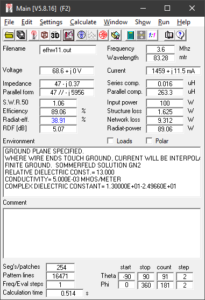 4NEC2’s main form has several related calculated results that bear comment / explanation. These values are all calculated from the NEC output report file which can be viewed by clicking the tenth button on the toolbar.

This article discusses interpretation of the form for the simple case of a single source.

Note that NEC uses peak values to specify amplitudes, and 4NEC2 effectively transforms these values to RMS for display.

Structure Loss is the reported loss from the NEC report due to the structure, eg conductor loss, loads etc. The value is calculated for the simplest runs.

Network Loss is the reported loss from the NEC report due to the network elements, eg due to NT elements. The value is calculated for the simplest runs.

The displayed value is scaled as discussed under Input Power.

The quantity Radia-power does NOT mean the total radiated power, and it is inconsistent with the use of radiation elsewhere in 4NEC2.

Efficiency appears to be calculated as \(Efficiency=(1-\frac{StructureLoss+NetworkLoss}{InputPower}) \cdot 100%\).

The value is calculated for the simplest runs, and does not capture all system losses so it deserves a qualified name. 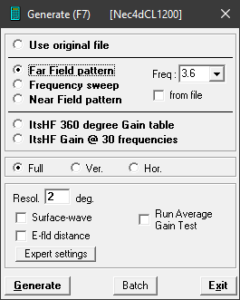 The value is calculated only for for runs that calculate the “Far Field pattern”. Since it depends on summing the far field, it requires a model run of sufficient resolution to give good accuracy.

RDF is for Relative Directivity Factor is not an industry standard term, but there is a Wikipedia page. which states

it is the antenna gain in the forward direction divided by the gain in all other directions.

Radiation resistance is used with a variety of meanings, especially among hams. Let’s use the definition given earlier and the specific point is the feed point.

From the form above:

What about the surface wave (ground wave)?

In the strict sense that radiation is detached energy that is dispersed in space without loss and the power density falls as the square of distance, the surface wave is not quite that. It’s attenuation is faster than radiation in a vacuum and it will often be attenuated sufficiently to be insignificant are great distances. To that extent, the attenuation of the surface wave (ie absorption by the natural ground) can be accounted for as part of ground loss.

In a ground wave application, one might want to perform analysis at some lesser distance and  include the power in the ground wave at that distance, but perhaps it should not all be lumped together under the title radiation.

A particular installation might be licenced for a given cymomotive force at some specific distance, and one could calculate an efficiency figure for the system being the power required with lossless antenna and ground to achieve that objective as a percentage of that actually required with real system losses… but it is not Radiation Efficiency as defined in (ITU 2013).