(Purdum 2020) describes a small transmitting loop (STL) which is a little novel in that it uses an arrangement of four circular conductor loops, two in parallel in series with the other two in parallel.

The article goes on to claim some pretty extraordinary efficiency calculated from radiation resistance for a loop structure that is shown at a height of perhaps 2m above natural ground.

Unfortunately, the meaning of the terms efficiency and radiation resistance are often critical to understanding written work on antennas and it is best for authors to use accepted industry ‘standard’ meanings and to declare their interpretation for clarity.

Let us draw on the IEEE standard dictionary of electrical and electronic terms (IEEE 1988) for widely accepted meanings for some key terms.

A large sphere whose centre lies within the volume of the antenna and whose surface lies in the far field of the antenna, over which quantities characterising the radiation from the antenna are determined.

Simple small loop models rely upon a common formula for Rrad which assumes free space and uniform current around the loop, ie negligible change in amplitude and phase. The 6m perimeter double-double loop at 14.2MHz current phase delay around the loop of 100°, hardly negligible. In fact the formula falls down when the end to end length of the loop conductor exceeds λ/10 (36°).

The article gives a formula for efficiency \(Efficiency(\%)=\frac{R_{rad}}{R_{rad}+R_{loss}}\), a common enough formula (though the result needs multiplication by 100 to be in %) and nothing too contentious about it if Rrad and Rloss are valid.

The article references two loop calculators, both of which use the common formula for calculation of Rrad of a STL in free space. As mentioned, the formula loses validity when the conductor length of the loop exceeds λ/10, and in any event does not capture the effects of ground reflection in real world antennas. See
Accuracy of estimation of radiation resistance of small transmitting loops for further discussion.

Neither calculator referenced captures all system losses, eg ground losses, and so they are overly optimistic / not relevant to real world antennas.

The article references AA8C as authority for their claim that paralleling two loop conductors raises Rrad by a two.

That is not to say that parallel conductors behave the same in all respects as a single conductor, conductor loss and inductance is clearly different and that will flow into antenna Q and bandwidth.

There may be advantage in two parallel loop conductors, but they do not include raising Rrad by a factor of two.

The article gives in Table 1 efficiency figures ranging to 89.9%, figures that would sound alarm bells to most readers.

The predicted efficiency is based on calculators which have two significant failings:

On the back of these overly optimistic efficiency calculations, the authors misunderstand the effect of parallel conductors and wrongly apply a factor of 2 to Rrad due to use of two parallel conductors. The increase of Rrad by 2 due to the series conductors is naively simple as mentioned earlier. 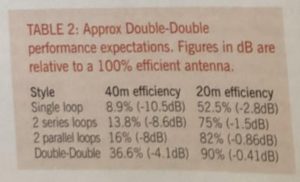 Above Table 2 from the article gives predicted efficiency at 20m ranging to 90%. 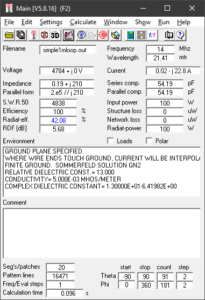 The performance of this type of structure is best assessed by direct measurement of field strength in the far field.

The article then sets out observations on air to support the calculated expected efficiency.

They mention under the heading Observations that the mag loop appears to perform at levels suggested by modelling whilst observing that no account was made of ground effects etc.

Indeed confirmation of wrongly based predictions raises questions about the experiment design, why did it support propositions that were not true.

Efficiency was prominent in prediction, yet nothing in the reported observations went close to directly measuring radiation efficiency.