Opinion by some is that the modification I performed above which electrically bonds the two connectors through a brass bar of about 60mm length is likely to significantly degrade performance. 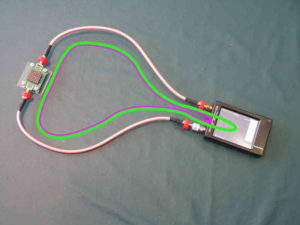 In the case of the unmodified nanoVNA-H, the extraneous shield currents flow approximately around the green path, traveling though the ground planes of tx and rx port circuitry before being joined approximately in the middle of the instrument.

In the case of the modified nanoVNA-H, the extraneous shield currents flow approximately around the magenta path, with far less of it flowing in through the ground planes of tx and rx port circuitry and creating ground conductor noise voltage.

It is difficult to understand the claim that the green current path should be better, and that the magenta current path degrades performance. Rather one might question the wisdom of isolating the tx and rx port grounds to drive these currents further into the box.

Of course I defer to credible measurement that shows that the modification does degrade performance.