The details of the model are a little sketchy, I was interested in how it modelled the phase of the layer currents, or if you like the implied velocity of propagation of the EM wave in the conductor.

Again the model is of a copper clad steel conductor, but tweaked a little to fit the apparent limit to the number of layers modelled in Simsmith, it is 1mm diameter, 500 layers (1µm per layer). 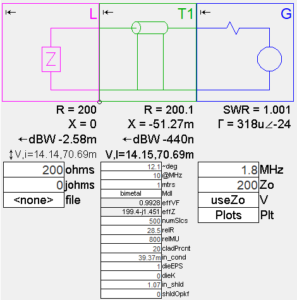 Above is the model with cladding thickness set to 20% or 100µm. 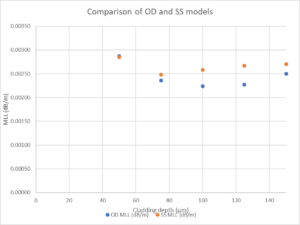 Above is a comparison of the two models.

Both models show that although the loss decreases with increasing cladding thickness initially, there is a turning point where it then increases for a while.

That characteristic is due to phase change in the current at increasing depth, reaching a point where the current is in the opposite phase to the surface current and so whilst it contributes to loss flowing in the imperfect conductor, it decreases the net current flow. Increased loss and reduced net current means increased equivalent internal resistance.

The turning point is different though, which questions whether one or both models are wrong.

If we take my own model, it might surprise some readers that the loss is less when the cladding is around 2δ than 3δ, it does not fit with the traditional explanation of skin effect which ignores the phase change with depth.