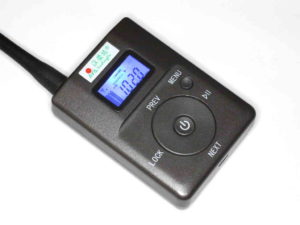 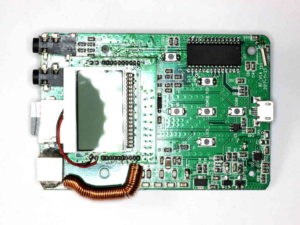 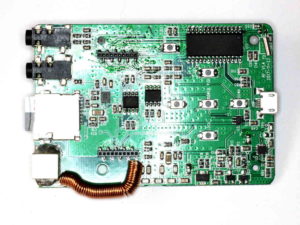 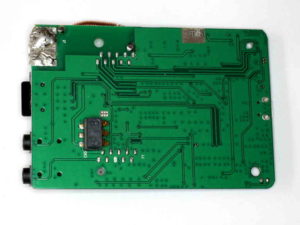 Lots of hand soldered blobs on the PCB. The antenna socket is a female M5 thread, apparently covered with an insulating cap in some shipments. 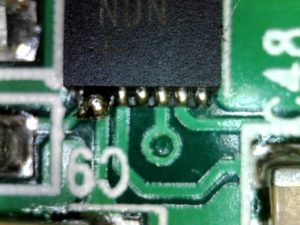 Above is an example, the blob was attached and may have been shorting the end two pins. This is a tiny chip, 3mm case length and 0.4mm pin pitch. Sadly, removing it did not fix the intermittent SD problem.

Playing music from an SD card

First test was to insert an SD card with music copied from commercial CDs. Results were disappointing with distortion on higher peaks in the music, so it was time to review the level lineup.

On the meaning of dBFS, the maximum instantaneous sample value of a LPCM waveform is taken by most to be 0dBFS. Implicit then is that it is not possible for a sample to exceed the maximum sample value that can be encoded (a simple enough concept you might think). That means the maximum RMS value of a sine wave will be 3dB less. To demonstrate that standards are only standards because of exceptions, another ‘standard’ is the 0dBFS is the RMS level of the maximum sine wave that can be encoded, and therefore, instantaneous peaks can reach +3dBFS. This article subscribes to the former more logical and widely used meaning.

The BBC specifies an equivalence of 0dBu and -18dBFS levels, and an FM lineup level of 0dBu or -18dBFS for 8dB less than maximum deviation of 75kHz (30kHz). Since the first of these measures is an RMS voltage, and for lineup a sine wave test tone is used, lets assume that the -18dBFS is also RMS, and it is the result of summing two equal 1kHz sine waves in each channel, then the channel level is -24dBFSrms or -21dBFSpk.

The music files were reviewed and most had peak levels between -2 and 0 dBFS, so their level needs to be reduced by 10dB. Since there is no means in the transmitter to do this, the audio files were processed using sox to achieve a 10dB level reduction. That cleaned up the distortion issue.

Above, a bash script to run the various stages of the rework.

There is a problem where the thing just loses audio output from time to time, and after a few seconds resumes from where it was at. It perhaps hints IO problems, but having tried several types of SD card, all of which were fully reformatted before being written with the music files, I am convinced the firmware is not tolerant of flash issues that are accommodated by all successful flash reading firmware.

The device has a 3.5mm TRS jack for auxiliary input with adjustable gain.

This might not be sufficient sensitivity for some portable MP3 player headphone outputs.

The specifications give the power at power level 1 as 10µW which would comply with the Australian LIPD class licence. 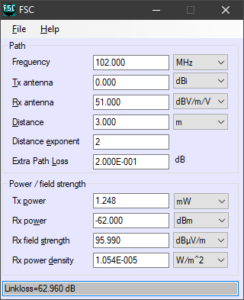 Evaluation of the field strength in a simple test using a small untuned loop (based on calculated AF) suggested more like 1mW EIRP. It is a huge discrepancy, but interestingly pictures of the test report for FCC approval show no external antenna and a small plastic blanking plug preventing use of the whip antenna on the device I evaluated.

These observations reconcile well with the fact that the transmitter located inside a building can be heard well a few hundred metres away. Measures would have to be taken to make this compliant with the class licence.

In free space, we would expect that a 10µW EIRP would provide adequate field strength to a few hundred metres, more like 30m when building losses etc are applied.

The SD player was evaluated over some days, and it was never good, and at times appalling with stalls in music. It seemed to be worse on warmer days (towards 30°). I do not know if it was a bad type, or just a bad instance, but I have lost patience and so it was returned for refund.