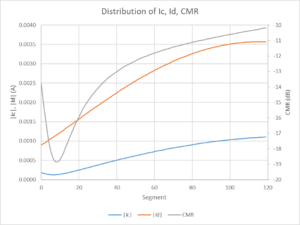 Above is a plot of |Ic|, |Id| and CMR in the NEC-4.2 model scenario. Segments are numbered from the lower end to upper end of the 20m long feed line.

CMRR for the balun in a 50Ω test bench scenario at 7MHz is 44dB (or -44dB, depending your your definition).

So, whilst it is held by some that CMRR is a useful metric for baluns, it turns out that in many practical antenna applications, CMRR does not provide a means of estimating common mode current, nor can the value be plugged into a MOM modeler like NEC.

The NEC model used in this series of articles modelled the balun’s common mode impedance as a R,X LD element in one segment. The value of R,X cannot be found from the balun’s CMRR.

This scenario shows that the simple ratio CMR varies along the feed line and cannot be simply inferred from the balun’s CMRR.