The MFJ-1786 is a little more complicated in that there is a low pass L network (approximately 200nH and 100pF) between the coax socket and the auxiliary loop.

Above is the simulation circuit. The first line section is of negligible length and is there for later. The next line section simulates that used in the original measurements. The very small inductances are the mutual inductance components of the equivalent circuit of the coupled auxiliary and main loop inductors. 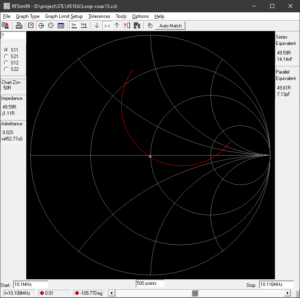 Above is the simulation result.

The first low pass L section acts a little like a transmission line section. Below the break point (40MHz in this case), attenuation is low and phase delay is roughly proportional to frequency… very much like a transmission line. With a 50Ω load at 10MHz, the phase delay is about 20°, which is roughly equivalent to about 1.1m of VF=0.66 50Ω line, or about 40° rotation on the Smith chart. There is also a phase delay in the network comprising the coupled coils. All of these contribute to the rotation of the ‘C’ curve.

Let us now simulate at 28.5MHz, replacing the load with a resistance of 0.8Ω obtained from the NEC simulation at 28.5MHz.

Above, the revised simulation circuit. The load resistance was changed to match the NEC simulation, and the tuning capacitor adjusted for best match… no other changes. 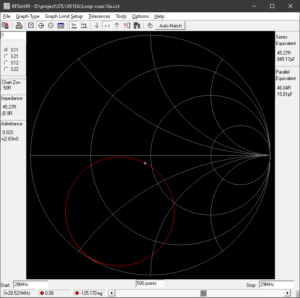 The broad tuning range of the auxiliary loop feed was the subject of (Dunlavey 1976), though the MFJ-1786’s cascaded L section may improve the tuning range (either in width of quality of match).

Now what about that first coax section?

The referenced article stated there were two steps, the rotation and re-normalisation of impedance to remove the offset.

This simulation has dealt with the normalisation of impedance, and there is a residual rotation as could be seen in the following.

If we adjust the length of that first line section, we can demonstrate that the rotation is offset by a -8.3m length of 50Ω VF=0.66 lossless coax. 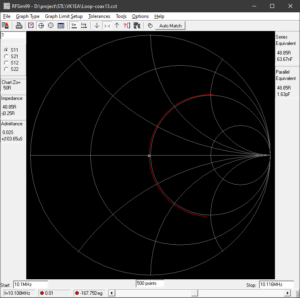