There is a common Rule of Thumb that to be effective, the magnitude of common mode impedance of a Guanella current balun in an antenna system should be at least 500Ω (Reisert 1978).

This article proposes a possible origin for this thinking, and discusses the validity of the underlying model. 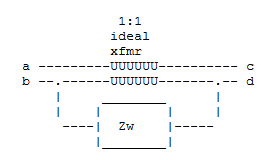 Above is a model  (Lewallyn 1995) proposes for a Guanella 1:1 balun using a coil of coaxial line to wind the choke, and goes on to give some equations for analysis of the balun in the context of the following model.

Above is a figure from Lewallyn that captures a very simple linear circuit model that is often used in thinking about a balun in an antenna system.

A little massaging of the numbers shows that if:

Insertion VSWR will be no worse than about 1.1.

That sounds like a good objective, designing for Insertion VSWR in a matched system.

Note, that says nothing about its behaviour for other than the case Z1=Z2=50/2Ω (with the centre grounded), nor for the effectiveness in reducing common mode current (its principal function).

A problem in applying the model to an antenna system is that the model assumes all interconnections are electrically short (ie no significant transmission line effects) and the two GND points are the same point (ie that there is not potential difference between them due to the current that flows between them.

A very important point is that the two places labeled “GND” are THE SAME POINT. If Z1 and Z2 represent an antenna or antenna/feedline, the path back to the balun input must be included in values Z1 and Z2. Or, to put it another way, Z1 is the impedance measured between terminals c and b, and Z2 the impedance between d and b, with the balun disconnected.

A further problem is that real antenna systems are unlikely to be accurately represented by Z1=Z2=50/2Ω. 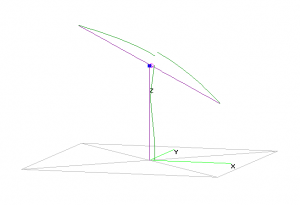 Above is the model geometry of a sloping dipole in NEC. The vertical conductor models the common mode current path of a coaxial feed, the blue square near the top is a balun modelled as a load of 5+j500Ω. The red circle is the source exciting the model. This is a classic way of modelling a coax fed dipole.