Progress has been slow (too many projects?), but the CNC Router project matures and it is time to try making some components of the current probe.

The PCB was designed in Kicad. 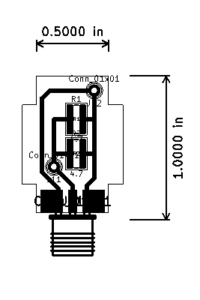 Electrically, the current probe is a current transformer with 10t secondary wound onto the toroidal core and terminated on the PCB which as 2x4R7 1W 1020 SM resistors providing the CT burden and a SMA end launch coax connector for a cable to the RFPM2.

The prototype will use the common FT240-43 toroid with a small coil, a small PCB to carry the burden and an SMA coax connector, and a set of plastic cheeks to package the whole thing.

Kicad produces Gerber and Excellon files for manufacturing, but they need to be converted to gcode for the CNC router. Flatcam was used for that, but it is VERY frustrating with lots of defects, but improving. 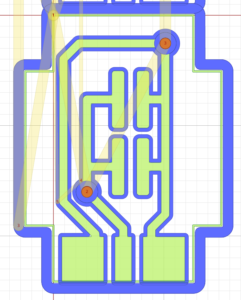 Above is a graphic from Flatcam of the manufacturing files for the PCB which will be routed on the CNC Router. The board takes an end launch SMA connector, and the ‘ears’ at the sides locate in the cheeks. 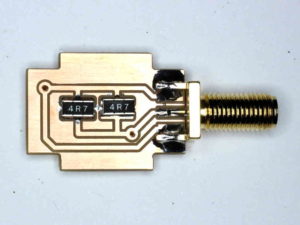 Above, the PCB with burden resistors and end launch SMA connector. 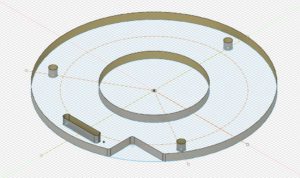 Above is a graphic from Fusion360 of a cheek. A pair will be cut from clear 3mm PVC as a trial. The slot accommodates the PCB ‘ear’, and the notch allows access to the SMA cable connector nut.

Visualise the final current probe as a pair of cheeks clamped around a FT240-43 core with the small PCB carrying the current transformer burden (2 x 1020 SM 4R7) and an SMA F connector for the cable to the RFPM2 (which can be calibrated in dBA). 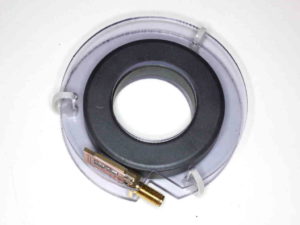 Above is a mock up of the first pass cut of the cheeks using cable ties. The cut is a bit rough in places as the work vibrated and obviously need to be better secured. A 10 turn winding of 0.5mm enamelled wire on the core will terminate on the PCB. 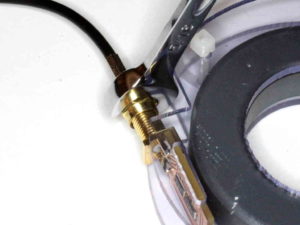 The SMA connector has room for an ordinary open end wrench. 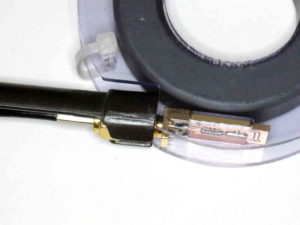 Some parts are on order for completion of the project in some weeks.