Nevertheless, one online expert assured me it is a fake because genuine ones use green solder mask.

So that identifies the first significant issue, what is a nanovna, what is a nanoVNA-H, what assurance do you have buying from Chinese sellers on ‘their’ market places that you are getting what you want, or even simply what they describe. Search eBay for “genuine” and see what it returns.

Part of this is due to the nature of the hardware itself, it is not really open source, and it is not closed source. Enough is published to make it copyable (the Chinese fear the Chinese who by and large have zero respect of intellectual property). Amidst this are claims by apparently original developers of good and bad clones of their designs.

I identified a significant defect in my nanoVNA-H PCB v3.3 (says the label, but yes, it could be a fake, but a very convincing copy) that was traceable to a design failure, inadequate power supply decoupling on the three mixer chips. This was not a fake related issue, the schematic for nanoVNA-H PCB v3.3 shows inadequate decoupling.

So after several revisions of the nanoVNA-H which was published on the back of the original nanovna, it had a fairly basic design failure, replicated three times.

Most packaging looks like a prototype, and although mine had a case, these things are essentially prototypes.

Mine has not yet had any issues with the battery charging functionality, but online discussion seems to consider the battery charger a significant contribution to noise, and the chip (which seems unreliable in user experience) is to be replaced by a different chip (in v3.4 if I understand the discussions correctly).

The mixers fitted to mine where the older NXP SA602 as against the SA612 shown on the schematic… perhaps that save a a cent or two like not fitting the needed decoupling caps.

The SMA connectors are PCB edge mount type, and one wonders how they will survive lots of cycles of on and off, especially if torqued to specification.

The calibration parts supplied with mine were good, apart from the dicky SMA(F)-SMA(F) which does not have wrench flats on the barrel, so it requires a special tool to release it… again that might have saved a few cents.

The jog wheel that lots of users complained about, some even replacing it with push buttons, was really terrible to use… until I replace the -H firmware with -Q which fixed almost all the usability issues with both the jog wheel and the touch screen.

But, the biggest shortcoming of the hardware is that it is desperately short of storage, whether that is system chip flash, or other storage (there is none).

The storage shortage seems to be the underlying reason for so many shortcomings:

Nevertheless, measurements below 300MHz seem fairly reasonable if care is taken with calibration, quite good below 100MHz. There is a big glitch at 300MHz (the transition to harmonic mode) and naturally, measurements in harmonic mode are significantly noisier.

The dynamic range is modestly low, and the device would not for instance lend itself to alignment and assurance measurement of a set of UHF repeater diplexer cans, it just lacks the dynamic range to measure the depth of the all important notches.

But, it can be used for a host of antenna related measurements at the many articles I wrote demonstrate.

Eager hams will buy these with no idea of the requisite knowledge to exploit them, and that knowledge does not ‘come in the box’ so to speak… so many will be discarded.

The “requisite knowledge” includes information specific to the nanovna, it is spread far and wide over a range of what must be regarded as ‘social media’, and some traditional developer channels such as github. Some of the social media channels are not public access, for example probably the largest wiki is restricted access.

I have implemented and tested based entirely on information supplied with the instrument (a menu block diagram, quickly stale) and information found that was public access found using Google. The extent to which that impacted results is evidence of the project characteristics.

The frenetic rate at which multiple parallel firmware versions and PC clients made releases has slowed which is a good sign, it is very challenging to pursue a rapid release cycle with quality releases.

The T-Check value was calculated and is plotted here in VNWA. 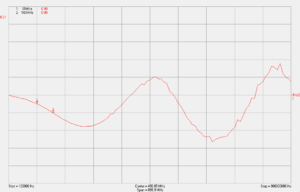 Above, the T-Check results are not stunning at all, the ideal result is 1.0 at all frequencies. Rhode and Schwarz recommend that more than 15% error is unacceptable… of course that is in a commercial grade VNA.

A correspondent suggested I “treat the nanoVNA as a plaything”, but it is more capable than that. It certainly is capable of reasonably good accuracy with very modest dynamic range to 100MHz (that is not a typo), and at the price that might still be very good value to users with the requisite knowledge and experience to exploit it. It could of course be a low cost introduction to VNAs, though lack of adherence to principles detracts from its value as an educational tool.

The nanoVNA and the PC clients pay little respect for convention and industry standard terms, so whilst one might work around the defects, recourse to other graphics tools for quality presentation material is necessary. That is not likely to change, it is part of the anarchy and chaos of the project and user popularity weighs more heavily than engineering correctness.

Many users ask for many features like a larger display, a good replacement for the jog wheel, Bluetooth, WiFi, bigger battery, but for the most part they seems satisfied by mediocre measurement performance, lack of averaging, lack of storage for calibration sets, lack of storage for sweep data sets, small fixed sweep size.

The generations of hardware sold to date appear to have known shortcomings that contribute to some of the issues mentioned, so if you buy one of these things, perhaps it should be considered highly experimental and simply an edition in a series that might in time deliver a better product.