One of the intended applications of the CNC router is to cut openings in metal and plastic enclosure boxes boxes for things like LCD displays, tactile button switches, connectors etc.

First ‘production’ job was a box to contain the grbl_ESP32 gcode interpreter, part of the CNC router if you like.

This module is the grbl_ESP32 box in the block diagram above.

The enclosure is an ABS box purchased on eBay… well two were purchased and one hopelessly damaged in transit due to poor packaging and refunded… this is the way of Chinese sellers. The remaining one has small damage to one corner. 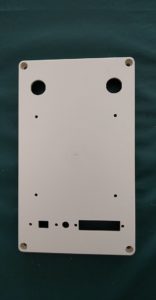 Above, the box cover was routed out for the various connectors and PCB mount. The box was routed with a 2mm carbide end mill. 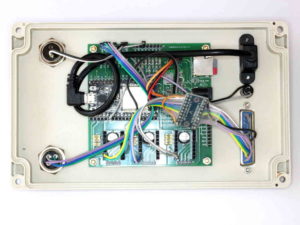 Above is a view of the underside of the cover with all the electronics fitted. The on-board stepper drivers are not used (not large enough for the CNC6040 motors) and the shrink wrapped inline module is a 3V/5V converter from various on-board signals to the parallel port interface to the standard CNC parallel port controller.

The gcode was written using a Python script to make high level calls to a set of functions being developed for common parts. 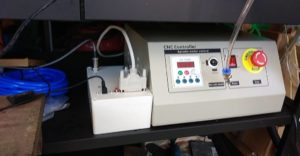 The external grbl_ESP32 box allows use of the parallel port style CNC controller without modification.