It is not really a project as such, but a loose collection of hardware versions manufactured in variously compliant forms, and several PC and web clients competing for space. Information is partly in the public domain, partly in restricted access forums where the controller’s identity is hidden… the modern way of ham radio.

After some research, and with some residual uncertainty, I decided upon the so-called nanoVNA-H design by Hugen79.

Hugen79 nominates a seller on Alibaba, but I was unable to purchase there because it would not accept my suburb in an address, and unwilling to put at risk the minimal buyer protection by purchasing outside of the selling platform, I went to Aliexpress for sellers. (No listings on eBay or Amazon for AU account holders, but many listings have appears on eBay since purchase). 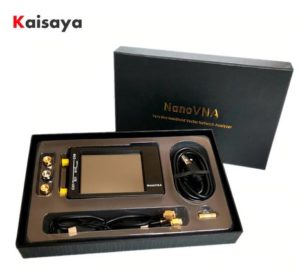 Above is the pic from the seller’s listing.

Included in the kit are two SMA(M)-SMA(M) cables of about 220mm length.

One of the cables separated from the connector before its first use. 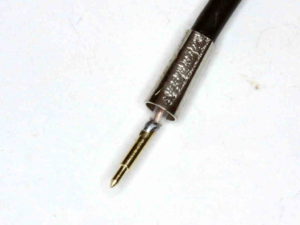 After removing the heatshrink so as to not disturb what was underneath we see a crimp sleeve that is slightly elliptical with no hint of hex crimp at the lower end, and further up six flats around the sleeve, irregularly spaced and with tool marks from a pair of pliers.

The sleeve was crimped by hand with a pair of pliers and done in a fashion to appear to be a proper hex crimp, a fake.

Note also the circumferential tool marks on the centre pin.

It is classic Chinese misrepresentation, a fraud, and that is reason to condemn both cables without further inspection as the maker cannot be trusted.

Nevertheless, I measured the loss of the apparently good cable. It also was not properly crimped, so I crimped the things with the correct hex die (the inner pins were soldered), and measured the loss of that and the other cable after re-crimping, and they exhibited almost twice the matched line loss that would be expected of RG174. The cables do not appear even weakly magnetic, so it is unlikely that they use silver plated steel conductors and I have a vague recollection that the cable the connector came off was stranded bare copper inner conductor.