I have been evaluating one for common tasks around a ham station and noticed a persistent glitch around 7.5MHz in scenarios where |s21| is high.

The nanoVNA-H has firmware NanoVNA-Q-0.4.3-20f33ba.dfu installed. The nanoVNA appears to be a nanoVNA-H v3.3 but it is hard to be sure, it is from China, the land of copyists and fraud. Indeed the nanovna-Q author asserts that genuine nanoVNA-H have a green overlay whereas mine is blue. Uncertainty is part of the territory! 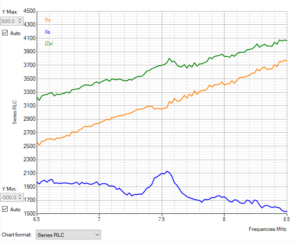 Above is an example where a ferrite cored inductor similar to an antenna common mode choke is measured, and the underlying curves should be smooth with some random measurement noise. The glitch around 7.5MHz is persistent and much larger than the random noise, so I have investigated further.

The nanovna-Q developer assures me that this is not due to his firmware, that it must be a hardware fault or design defect. It was suggested that flux, or the blue PCB overlay can cause this?

In examining the schematic, I find that the power supply decoupling around the SA612AD departs from the datasheet applications and the original nanoVNA schematic in that it has a much smaller bypass capacitor on pin 8. Not only is the existent 100pF not very effective below say 100Mhz, the resonant frequency of the series inductor and that capacitor is around 7.35MHz and at parallel resonance, bypassing would be totally ineffective. I will not try to guess what was in the designer’s mind.

The easiest way to see if your nanoVNA exhibits this effect is an uncorrected sweep with OC or SC cal part. 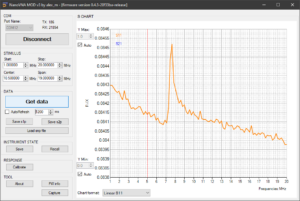 Above is such a sweep with auto scaling to show the glitch. Yes, it is small in absolute terms, but as can be seen, it is much larger than random measurement noise and as shown in the first chart, it rolls up into some measurements.