This article documents a task to perform a VSWR sweep of a VHF antenna stand alone, and to capture the data and screen image for download to a computer.

The instrument was OSL calibrated for reflection at Port 1 (Ch0 is nanoVNA speak, convention means little) for 100-500MHz.

A sweep was then performed from 143-149MHz, forcing some interpolation of the calibration data.

The nanoVNA was configured for VSWR and Smith chart displays, much as you would to use it stand alone.

The sweep was then “Paused”, and the nanoVNA carried to the computer and plugged into the USB. The power must not be disturbed, the controls must not be altered, the captured data is really just what is frozen on the paused display.

Note that if the thing is unplugged from the USB the nanoVNA resets and the data is lost, so plug it in properly just once.

I then connected to it using using nanoVNA MOD v3 and captured the screen, clicked get data once, and saved the .s1p file. 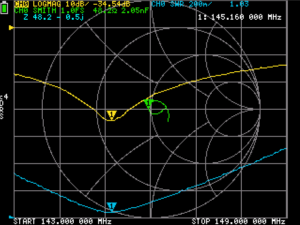 Above is the cropped screen capture.

This firmware also displays the marker values for the Smith chart in equivalent L or C, but additionally it displays Z as a complex impedance, an improvement on the -H firmware. 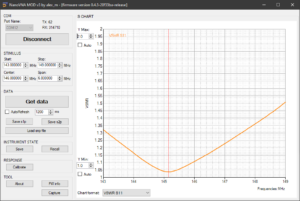 Above is the display in nanoVNA MOD v3.

This firmware had much better handling of touch input, and especially the jog wheel… a huge improvement. Not perfect, but much much better.

nanoVNA MOD v3 was the only PC client I found that performed screen capture.

Now all this looks ok… but if you want another capture, you disconnect from the computer, the nanoVNA resets, you restore all the settings and make the measurement and go through the whole process again.