This article documents a task to perform a VSWR sweep of a UHF mobile antenna.

The nanoVNA-H has firmware NanoVNA-H_20191018.dfu installed.

The instrument was OSL calibrated for reflection at Port 1 (Ch0 is nanoVNA speak, convention means little) for 100-500MHz.

A sweep was then performed from 400-470MHz, forcing some interpolation of the calibration data.

The nanoVNA was configured for VSWR and Smith chart displays, much as you would to use it stand alone, but I did have it attached to the computer to capure the display (it seems it cannot be saved for later playback). 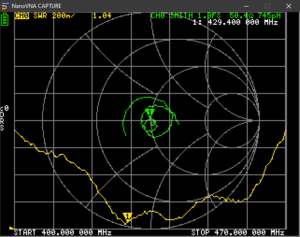 Above, the captured display. The results are pretty much as expected, no surprises there.

What is notable is the departure from the Smith chart as defined by Phillip Smith some 80 years ago (IIRC). Smith’s chart had circles for constant resistance and arcs for constant reactance as seen on the graphic above, but the cursor data is displayed as resistance in ohms and reactance as an equivalent inductance in henries. The thing about the equivalent inductance is that no such physical inductance actually exists in the system, it appears to be a concession to hams who do not understand the concept of reactance and more widely, the complex nature of impedance. Note that the reactance arcs on the graphic are NOT constant inductance but reactance (being 2*pi*frequency*inductance). This might be thought of as a helper by some, but the chart cursor data does not display the fundamental units of the graphic scaling being resistance and reactance (both in ohms).

Setting the cursor frequency was near impossible with the finger, a screen stylus worked better, but still pretty dicky.

Since the computer was attached to capture the nanoVNA screen shot (using nanvna MOD v3), let’s look at the equivalent display. 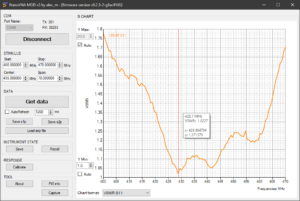 Above is the functionally equivalent display in nanoVNA MOD v3 autoscaled, so slightly different scale to the nanoVNA capture. 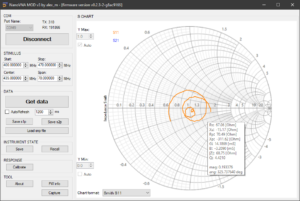 Above is the Smith chart display in nanoVNA MOD v3. The Smith chart is scaled in normalised resistance and reactance, that is ok but it might be entitled “normalised impedance” given that the cursor data is not normalised, and the cursor data does contain resistance R and reactance X. The cursor also shows among other things, admittance values (G and B) but the sign of B is wrong in this instance, it should be the opposite of the sign of X.

By and large, the nanovna’s on screen display of the VSWR trace was good, though a bit lumpy, and could be used for antenna checking or tuning. The Smith chart requires a calculator to work out the reactance component at the cursor.

nanoVNA MOD v3 was the only PC client I found that performed screen capture.