This article documents some tests using a small ferrite cored test inductor that provides a similar impedance to that of a common mode choke suited to HF antenna feed lines.

The nanoVNA-H has firmware NanoVNA-H_20191018.dfu installed.

A small fixture was OSL calibrated and impedance measured by reflection (ie s11).

The results broadly reconcile with previous measurements of the inductor, but the jitter is worth of examination. 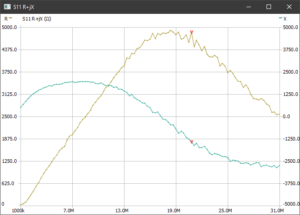 Above is a chart from nanovna-saver showing the measured impedance components, we might expect a reasonably smooth curve for each. It has a lot of jitter on it, and you might excuse that as a result of applying the instrument and method to such a high impedance… but for two things:

The peak at the marker is almost always significantly higher than its neighbors, and that is unlikely to be the effects of random noise but has some other cause.

nanovna-saver has a filtering capability, and averaging does not reduce the jitter to the extent that one would expect of Gaussian noise jitter. (We might expect that |s11| error is normally distributed, and the same is true of log(|s11|) when |s11| is very close to 1.0 as it is in this case.) 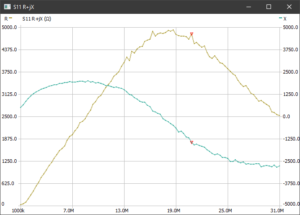 Above is a plot of impedance components with averaging parameters set to 36/9 (average 36, discard 9… does that mean to average the central 36 of 45 observations?). Whilst the filtering does reduce some of the jitter, the peak at the marker remains a peak, as do several other local peaks… so we might conclude there is something systematic at play.

Further examination reveals that the phase of s11 is fairly smooth, but the magnitude has jitter that aligns with that in the R and X components of Z and would seem to be the main contribution. |s11| jitter of 0.01dB corresponds to about 1 part in 1000 jitter in |s11| or about 1 in 10bits in an ADC at FS. I have not yet found specification of the ADC resolution of the nanoVNA (it seems not important enough to publish).

In conclusion, the instrument is capable of measuring common mode chokes of impedance components to 5000Ω in s11 reflection configuration, albeit with jitter which appears to include some systematic error. The plots are chunky also by virtue of the limit of 100 frequency points in a scan, even when a computer is attached (duh!).